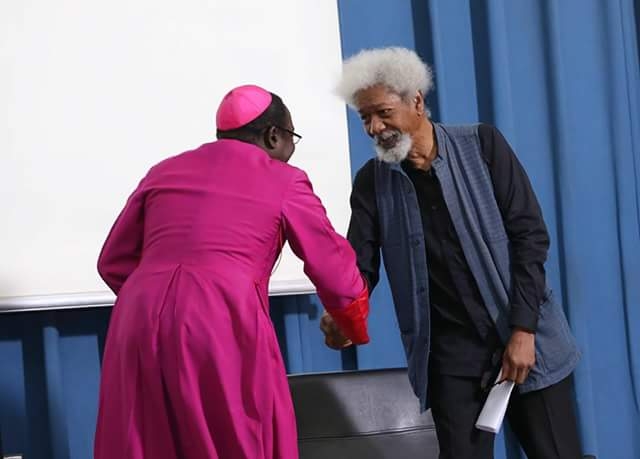 Nobel Laureate Professor Wole Soyinka has condemned those who are threatening fire and brimstone on Matthew Hasssan Kukah, Bishop of Sokoto Catholic Diocese over his Christmas message that was a critique of the Muhammadu Buhari administration.

The Islamic community asked him to leave the seat of the Caliphate if he failed to aopogise for what they considered an affront on Islam.

According to Soyinka: “It should not come as a surprise that a section of our Islamic community, not only claims to have found offence in Father Kukah’s New Year address, what is bothersome, even unwholesome, is the embedded threat to storm his ‘Capitol’ and eject him, simply for ‘speaking in tongues’. Any pluralistic society must emphatically declare such a response unacceptable… On a personal note, I have studied the transcript as reported in the media and found nothing in it that denigrates Islam.”

Below is Professor Soyinka’s article:

The KUKAH OFFENCE and ONGOING OFFENSIVES.

The timing of Bishop Kukah’s Christmas message, and the ensuing offensives could not be more fortuitous, seeing that it comes at a time when a world powerful nation, still reeling from an unprecedented assault on her corporate definition, is now poised to set, at the very least, a symbolic seal on her commitment to the democratic ideal. Let no one be in any doubt that some of the most extreme of the violent forces that recently assaulted her governance citadel are sprung from religious and quasi-religious affirmations, a condition that still enables many of them to be brainwashed into accepting literally, and uncritically, indeed as gospel truth, any pronouncement, however outrageous and improbable, that emerges from their leadership. As usual, we have not lacked, within our own distanced environment, advocates who, even till recently, claimed to have seen in their vision, the triumph of God’s own anointed in the electoral contest of that same United States. They have been specific in their prophesy that what was denied at the ballot box would be restored in the law courts. And to set a divine seal on the matter, were not our streets in a part of this nation actually inundated by religious processions in support of the candidacy of their supposed Messiah, named Donald Trump? They had conferred on him the mantle of upholder of Christian values, endangered by satanic practices in, of all places, a nation designated as – God’s own Country!

Of course, not all such tendencies represent the true face of any professed religion, we need only remark that all religions are plagued by a lunatic fringe. In this nation we have learnt the painful way what such inbred loonies are capable of. Thus, extreme care, and historic awareness, should be taken in imputing any act or pronouncement as an attack on faith. At base, competitors for recognition as first line defenders of the ramparts of religiosity are often motivated by non-religious agenda, which is yet another reason for the exercise of restraint and collective responsibility.

It should not come as a surprise that a section of our Islamic community, not only claims to have found offence in Father Kukah’s New Year address, what is bothersome, even unwholesome, is the embedded threat to storm his ‘Capitol’ and eject him, simply for ‘speaking in tongues’. Any pluralistic society must emphatically declare such a response unacceptable. On a personal note, I have studied the transcript as reported in the media and found nothing in it that denigrates islam but then, I must confess, I am not among the most religion besotted inhabitants of the globe. That, I have been told, disqualifies me from even commenting on the subject and, quite frankly, I wish that were indeed the case. Life would far less complicated. However, the reverse position does not seem to be adopted by such religionists in a spirit of equity. They do not hesitate to intervene; indeed some consider themselves divinely empowered to intervene, even dictate in secular life.

With the foregoing out of the way, we are compelled to remind ourselves that religion is upheld, and practised, not by robots, not by creatures from outer space, not by abstract precepts, but by human beings, full of quirks, frailties and conceits, filled with their own individual and collective worth, and operate in the here and now of this very earth. That makes religion the business of everyone, especially when it is manipulated to instill fear, discord and separatism in social consciousness. The furore over Bishop Kukay’s statement offers us another instance of that domineering tendency, one whose consequences are guaranteed to spill over into the world of both believers and non-believers, unless checked and firmly contained. In this nation of religious opportunism of the most destructive kind especially, fuelled again and again by failure to learn from past experience, we must at least learn to nip extremist instigations in the bud.

One of the ironic features of religionists is, one is forced to conclude, a need to be offended. It is as if religion cannot exist unless it is nourished with the broth of offence. This may be due to an inbuilt insecurity, a fear that even the ascribed absolutes of faith may be founded on nothing more than idealistic human projections, not grounded in anything durable or immutable. Hence the over prickliness, aggressiveness, sometimes even bullying tendencies and imperious posturing. This leads to finding enemies where there are none. In certain social climates, it degenerates into inventing enmities in order to entrench theocratic power. In its own peculiar way, this is actually a rational proceeding. A perceived threat to a collectivity tends to rally even waverers round the flag. The core mission of faith custodians then becomes presenting religion as being constantly under siege. It all contributes to interpreting even utterances of no hostile intent as “enemy action”.

Was it all that long ago when el Rufai – now governor of Kaduna state – came under blistering attack by the christian community for allegedly insulting the divine persona of Jesus Christ? What did el Rufai say exactly? Nothing new or startling. All he did was deploy a common, everyday figure of speech to describe an overwhelming challenge. Both the circumstances and his exact phrasing elude me right now, but all it amounted to was that even Jesus Christ would find a particular problem intractable. Or perhaps it was simply that even Jesus Christ, were to return to earth,would be subjected to the Nigerian national culture of calumny? One or the other but, it hardly matters. What does matter was that instantly, there were demands from the ever-ready Onward Christian Soldiers – led by CAN leadership – for a withdrawal and apology. To my intense disappointment – as I declared at the time – el Rufai obliged. A huge mistake. Again and again we have warned against succumbing to irrational demands of religionists, yet even the brutal lessons of past surrenders appear to exercise no traction on society’s faculty of cause and effect, especially in that religious propensity for incremental demands. Surrender one inch, they demand a mile!

And how near impossible it is to come to grips with an even more recent and egregious bill of offence that took place over this very last Christmas of the year 2020! The now universal sales pitch of BLACK FRIDAY to lure seasonal shopping addicts to sale bonanzas drew solemn, sanctimonious flak from some religionists from the other side, this time the Islamic. A formal statement was issued, declaring this common placesale tactics an assault on the Islamic religion, since Friday happens to be its day of worship. These are the depths of absurdity into which society is dragged by the coils of spurious purism. Until now, we have yet to learn of Boko Haram, ISWAP, al-Shabbab and other rabid islamists declaring a cessation from killings in honour of Holy Friday. Again, one station that carried the broadcasts tamely withdrew its promotional campaign. Another piece of secular – that is, neutral- territory ignominiously surrendered. The tail continues to wag the dog.

Lest the point be missed or watered down, the escalation of such irrationality is very simply outlined. Christians, not to be outdone, will seize the next opportunity to remind the rest of the world how their own Holy Day, Sunday, must and must not be used in mundane transactions in the future. Next, the Seventh-Day Adventists will demand no-go areas for Saturdays. After that, the Hindus, the Sikhs, plus the thousand and one religions of the world cornering their own Holy Day, then week, then month until we are moved to reconstruct the present calendar entirely, abandon solar principles and rebuild temporal notation around some newly discovered power planet. Did that broadcasting station consider, for a moment, the preposterous dimensions of that sectarian demand before yielding ground to a ridiculous minority of extremists?

Of far weightier substance than any vaporous religiosity however, is the early mentioned civic condition of all occupiers of the same demarcated slab of earth, called nation, and their material and non-material entitlement as guaranteed by their enabling constitution. When any individual or group, however lofty and privileged in its own self-regard, orders a citizen to quit his or her chosen place of habitation, then the very concept of nation being is nullified. This is not the first time this fundamental principle of co-existence has been challenged. Still fresh in one’s mind was the mode of response by the Inspector-General of Police to a similar violation by a northern Youth organizationa few years ago when that group pronounced a deadline for the Igbo to quit their abode throughout the northern territory of Nigeria. It was a dangerous, provocative act, incendiary under any condition. That worthy maintainer of law and order was asked – and I recall this distinctly –why he failed to take action against this incitement to mayhem, such as even inviting the self-acknowledged leaders “for a chat”. That question was of course posed in the context of the starkly contrasting ‘rapid response’ agility by state security agencies, when a similar inciting proclamation was made by an Igbo group ‘expelling’ northern citizens from their territory. His answer was: such action would have security implications. By contrast, the Igbo group was proscribed as a terrorist organization. It should be chastening to any government that its proclamation remains ignored internationally.

What is Father Kukah saying? Simply what observant and concerned citizens of United States society recently remarked. The conduct of the US security forces, when confronted by peaceful protesters during the BLACK LIVES MATTER movement, was vastly different from that of the same security agencies when a predominantly white mob invaded its seat of government, thrashed it and hunted down a people’s elected representatives, rampaging for hours before they were finally “escorted out”. Such a contrast goes to the heart of nation being, and poses a real and urgent danger. That accusation has been voiced by both sides of the colour divide and across class divisions. Again and again, the warning was loudly voiced, it was unheeded. We remain fools if we fail to learn from the costly complacencies of others.

The obvious issue, to summarize, is – double standards. Lack of equitable dealing. Agreement or disagreement with Father Kukah’s position is demonstration of a nation’s badge of maturity, and should be read, quite obviously, as a continuation of that nagging, provocative discourse. One fails to understand why religion is being sprung centre stage as a legitimate extract from that New Year address. There is a deliberate, emotive displacement of a central concern. It is calculated avoidance, diversionary, and thus, nationally unhealthy. Humans should not attempt to play ostrich.