Mr Nathan Sharibu, the father of Leah Sharibu, the Christian girl kidnapped by Islamist sect, Boko Haram for over one year has dismissed reports that she has given birth to a baby boy.

His reaction comes after media reports claimed that she had put to bed.

Leah was said to have delivered of the baby a few weeks ago following her forceful marriage to a top Boko Haram commander, according to a reliable source close to the terror group.

The source said Leah, who refused to renounce her Christian faith, was forced to accept Islam before being married to a top commander of the terror group.

Leah was among 110 schoolgirls kidnapped from Government Girls’ Science and Technical College in Dapchi, Adamawa State by Boko Haram fighters on February 19, 2018 at 5:30 pm.

She was 14 years old at the time she was captured.

Reacting to the report, last night, the girl’s father, Mr Nathan Sharibu, said he didn’t want to hear anything like that.

“I have not heard that and I don’t want to hear any such news”, he told newsmen. 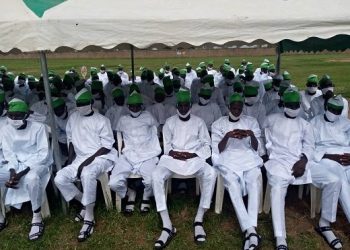