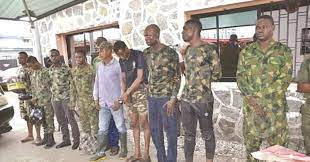 The Nigerian Army (NA) in its operation checkmate routine  has arrested 12 persons fully kitted in the  military uniforms.

General Musa explained that  some persons disguise as soldiers by donning the uniform, saying not everyone wearing or displaying the military banners, accoutrement are Army personnel.

The GOC made it clear  that more than 150 impostors were caught from January 2021 till date.

Some mounted roadblocks along Ajah road to extort money from motorists and indulge in other illegal duties.

Another set were nabbed along the Ilaro border of Ogun while smuggling bags of rice and other contrabands items into the country.

He added that the arrested persons will be handed over to the police for further investigation and subsequent prosecution.

The Army urged civilians in the country to stop wearing military uniforms,T-shirts, or display banners,  belts ,stickers and even items believed to belong to the Military.

Musa advised members of the public to report anyone parading himself to be a soldiers when he is not for interrogation and prosecution.

Pastor told me to fast, pray after beaten by my ex-husband – Tennis queen, Oshonaike