by Ediri Oyibo
in Africa, Nigeria, Religion
155
SHARES
1.2k
VIEWS
Share on WhatsAppShare on FacebookShare on TwitterShare on LinkedInShare on TelegramSend as Email
ADVERTISEMENT

The world’s most committed Christians live in Africa, and Ethiopia ranks highest for Africa in a new study report released by the Pew Research Center (PRC).

“Christianity is the world’s largest religion, with a big presence in most parts of the globe. But not all Christians share the same levels of religious commitment,” PRC noted.

According to the recent PRC study, “Christians in Africa and Latin America tend to pray more frequently, attend religious services more regularly and consider religion more important in their lives than Christians elsewhere in the world”.

The study analyzed 84 countries with sizable Christian populations. In 35 of those countries, at least two-thirds of all Christians say religion is very important in their lives. All but three of these 35 countries are in sub-Saharan Africa or Latin America.

The four standard measures of religious commitment used for the study are affiliation, importance of religion, worship attendance and frequency of prayer. 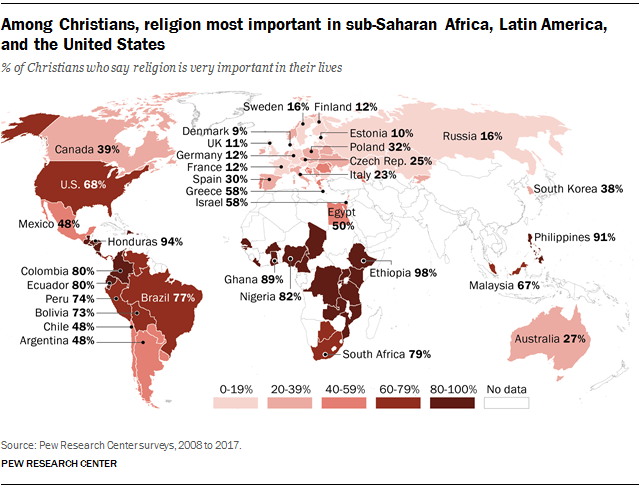 Findings also revealed that “at least four out of five Christians in Nigeria, Liberia, Senegal, Cameroon and Chad pray every day” and that more than 60% of Christians in every African country surveyed, said they attend church at least weekly.

The study indicates that Christianity in sub-Saharan Africa is growing the fastest than any other part of the world.

“These findings reflect the broader pattern of Christianity’s “march southward” from wealthy countries to developing ones.

“This phenomenon is particularly evident in sub-Saharan Africa, where Christianity is rapidly growing,” the report stated.

The study attributed the rapid growth of Christianity in sub-Saharan Africa to high fertility rates.