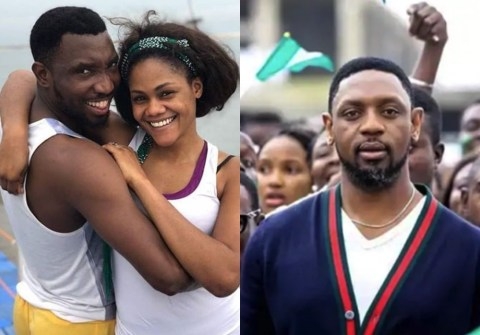 Nigerians have took to Twitter to express divergent views after a video emerged showing leaders in the Christian Association of Nigeria (CAN) declaring support for Pastor Biodun Fatoyinbo of Commonwealth of Zion Assembly (COZA).
TheNewsGuru (TNG) reports Pastor Biodun was accused of rape by Busola Dakolo, wife to popular Nigerian singer, Timi Dakolo.
The leaders, Reverend Jonah Samson, President of CAN Abuja and Reverend Israel Akanji, CAN President North Central, stated that they will stand by the church and that the gates of hell will not prevail.
”I assure you that we are with you and we will continue to be with you. We are in support of the church. We are in support of your pastor. We stand by him. and this church will continue to match forward. The I declare that the gates of hell shall not prevail against this church in the mighty name of Jesus” Reverend Jonah said
On his part, Reverend Akanji in his speech said Jesus expects his followers to be like the good Samaritan who was there to give help to a wounded soldier and not turn his back on such a soldier.
He also pledged his support to Fatoyinbo and COZA, adding that many Christians were praying for them.

So CAN Abuja sent representatives to COZA to support Biodun…

Perharps thank him too, for raping all those women. Why not. After all Fulani herdsmen are there to take the fall for it.

So CAN representatives went to COZA to show support for Biodun Fatoyinbo yesterday. Nigeria really is a "special" country lol pic.twitter.com/03ELk13XtP

Last month according to CAN, CAN cannot take a stand condemning Biodun Fatoyinbo, but today it is clear CAN indeed can stand in solidarity with the rapist.
CAN lead us to believe that CAN cannot, but today we know CAN can.

After seeing CAN representatives supporting Pastor Biodun Fatoyinbo,now I want to ask..This is a big problem….so is he trying to say that Christians living in those states he listed are not Christians enough because he himself resides in FCT? What has happened to Christianity. pic.twitter.com/QjG10KmApg

Not surprised. Even organizations that are said to be religious are very political in nature. Once again, we are not fighting the church, Biodun Fatoyinbo is a rapist and he needs to pay for what he did. https://t.co/E6lH8FT3ua

So CAN joined their voice and said they stand with Biodun Fatoyinbo. Like seriously, we are all doom with religion in this country 🤦🏽‍♂️

CAN must support him… Until he is proven guilty before they can go against him or sanction him. Busola Dakolo have no prove to back her claims. Let Timi & Busola Dakolo unveil their prove. Then we can all clap down COZA pastor Biodun Fatoyinbo. https://t.co/Cng5nl9HZT

I can't believe that CAN representatives went on a solidarity visit to COZA to see Pastor Biodun Fatoyinbo 🤔 pic.twitter.com/InSpcrKISv

You are still missing it: The allegation was not against THE CHURCH or COZA, the allegation was against an INDIVIDUAL….
Are you saying the individual is the same as COZA?
I need this clarification. pic.twitter.com/k2oSEF9TBI

I thought COZA was not under CAN 🤔 pic.twitter.com/xmvbND2HMM

https://twitter.com/sogaius/status/1150719180343271424?s=19
Meanwhile, Kwamkur Vondip, the National Director, legal and public affairs of CAN, had said in a statement that COZA is not a member of CAN.
The statement reads in part: “The association recognises that COZA, to the best of our knowledge, is not a member of any of the families that belong to CAN.
“CAN, as an association; it is equally sad that there have been recurrent allegations of rape and infidelity against some gospel ministers and other Christians as well.”