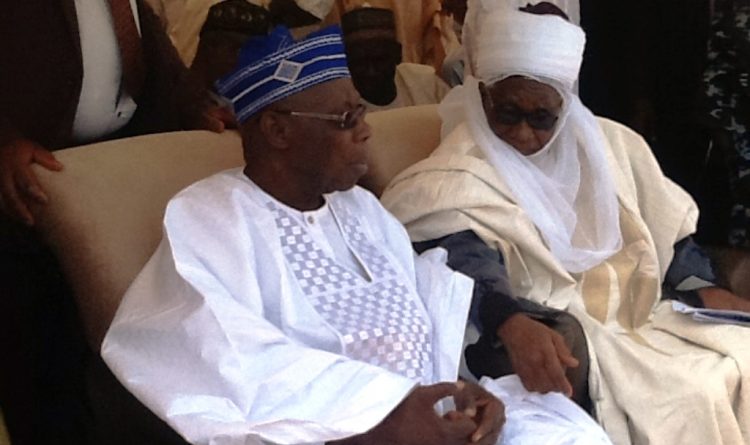 Former President Olusegun Obasanjo has advocated collective efforts, from all Nigerians, against the current insecurity and insensitivity situation in the country.

At the ceremony organised by the Abdullahi Kwasau Dynasty, the ex-president said the call became necessary in view of the incessant insecurity bedeviling the country.

He called on Nigerians not to allow things to go the way they were going in order not to plant the seed of destruction for the country.

“Nobody can say yes is my country, I can do whatever I like with it, God will not allow that to happen.”

In his speech, Abdullahi recalled that his relationship with Obasanjo started in 1975 during the regime of late Gen. Murtala Mohammed.

He said the regime kicked him and others out of office while he was a Commissioner in Kaduna State, under Gen. Yakubu Gowon’s administration.

“When they kicked us out of office, I quietly went back to ABU where I was from.

“Later, went I was summoned to go to Dodon Barracks, I asked myself, what crime have I committed as a commissioner to be invited.

“Certainly, when I presented myself in Obasanjo’s office, he told me that I was selected as a member of a committee.

“He, however, said details of my schedule  would be revealed when i catch up with other members in Calabar,” he said.

He said the ceremony was an opportunity for “members of the Abdullahi Kwasau dynasty to come together, to know one other, speak with one another and strengthen the relationship with one other.”

Ango said the future of Nigeria “is” not in naira and Kobo but in the legacies left the present generation of Nigerians would leave behind.

The octogenerian, therefore, advised Nigerians, especially the young ones, to do everything possible to leave good legacy behind for future generation.