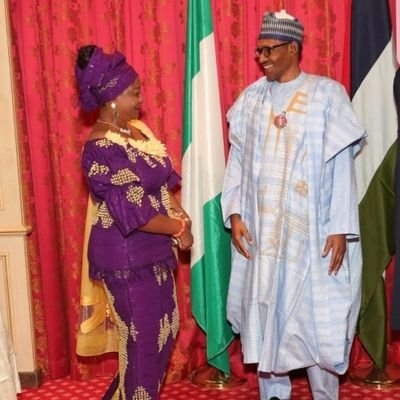 By Emman Ovuakporie
Still grappling with harsh economic challenges occasioned by the sudden increase in fuel pump price and the #ENDSARS protest, the citizenry have being jolted with the nomination of Ms. Lauretta Onochie, a senior assistant to President Muhammadu Buhari, as INEC National Commissioner to represent Delta state.
TheNewsGuru.com, TNG reports condemnation of the nomination by President Buhari led administration by lawmkers considering the fact that INEC ought to be an independent umpire in electoral matters.
Read their reactions below:
It’s unlawful and an abberation-Rep Tajudeen Yusuf, PDP, Kogi
In his view, Yusuf felt the president didn’t get the right adivise from his plethora of advisers who ought to have known better.
He said “without a doubt, her nomination which runs foul of certain provisions of the Nigerian constitution, as well as breaking morality is yet another decision gaffe by the presidency.
“It  is shocking, surprising and unbelievable that with the retinue of officials, aides and appointees with legal background and administrative competencies occupying strategic positions in government, none was able to advise and guide President Muhammadu Buhari appropriately to the effect that the nomination of Ms. Onochie will contravene Item F, paragraph 14 of the third schedule of the 1999 constitution of the Federal Republic of Nigeria (as amended); which forbids a partisan politician as a member of the Independent National Electoral Commission.
The Kogi lawmaker added that”it is baffling that Ms. Onochie who has the unenviable record and penchant for engaging in needless tirades, uncouth language and  unimaginable propensity for mudslinging; in her duties as presidential aide on social media, could be considered and nominated for a position that requires high level morality, unblemished maturity, unambiguous decorum and unparalleled decency.
“To a large extent, her nomination, unfortunately, is a glaring manifestation of how terribly low and abysmal governance has gone in Nigeria.
“One only hopes that with the deluge of public criticism that has welcomed her nomination, President Muhammadu Buhari, who perhaps may have being misguided, will take the necessary and Immediate action by replacing her with another person whose nomination will not generate public condemnation and general ridicule. Also, if her nomination is driven by President Muhammadu Buhari’s desire to recognize and reward her commitment to work, loyalty and service, there are numerous positions and offices to deploy her to but not as National Commissioner in INEC; where such key positions should be reserved for non-partisan and independent minded persons.
It’s improper to appoint aide as a refreeze in an umpire body-Rep Uzoma Nkem-Abonta, PDP, Abia
Nkem-Abonta, a lawyer in a telephone conversation with TNG simply said it’s out of place for Buhari to appoint his aide to be part of a body designed to be umpire in electoral matters in Nigeria.

Fear of possible attacks by #EndSARS protesters stops prisons from taking Evans, others to court for trial