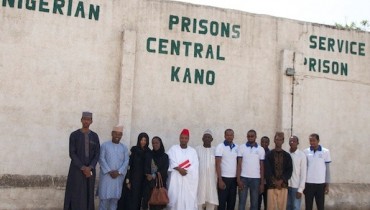 An operative of the Nigerian Correctional Service, Kano State Command has killed a vendor in the prison premises TheNewsGuru,com can confirm.

The killing of the vendor has been confirmed by the Nigerian Correctional Service in Kano state.

Confirming the incident, the Command’s Spokesman, DSC Musbahu Lawan, said the unfortunate incident was an accidental discharge, which led to the death of the vendor, and injuring one person within the vicinity of the Goron Dutse Medium Security Custodial Centre.

‘The officer involved in the shooting has since been arrested on the order of the state Comptroller of Correctional Centre, and a panel was set up to investigate the circumstances surrounding the ugly incident”

The Comptroller, who condoled the deceased family, assured that the case will be duly investigated and appropriate action will be taken according to the provisions of the law.

He added that the service maintains zero tolerance for indiscipline and any form of recklessness.