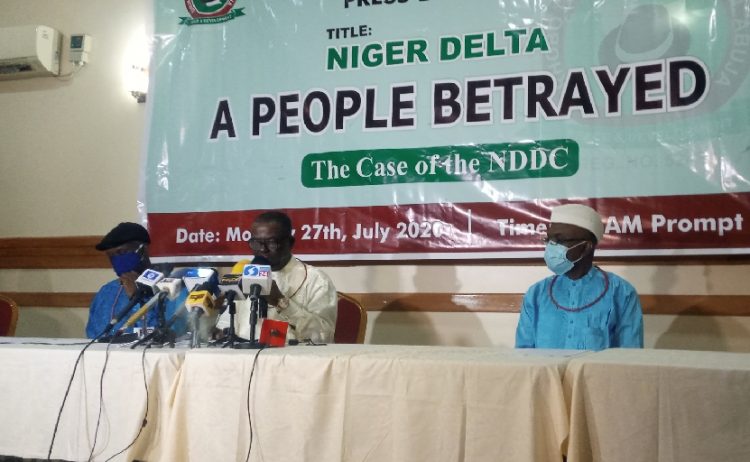 An Urhobo group representing the people of the Niger Delta known as Urhobo Leadership Forum, Abuja (ULFA) has said Governors of the South South are complicit in the ongoing rot in the Niger Delta Development Commission (NDDC).

TheNewsGuru.com (TNG) reports President of ULFA, Chief Jonathan Esin, who made this known at a briefing on Monday in Abuja, also stated that the federal government was not without blame in the recent happenings in the NDDC.

Chief Esin said the leadership of the NDDC has remained perennially unstable, and that the development appears to ensure the turn-by-turn looting of the Commission.

He noted with dismay the silence of the Governors of the Niger Delta region on the massive looting going on in the NDDC in spite of the fact that they have statutory roles to play under the Act in the attainment of the developmental goals of the region.

“It could be said that the federal government’s approach to the management of the NDDC after the expiration of the tenure of the last governing board gave rise to untoward developments. This is further exacerbated by the meddlesomeness of top government functionaries and their cohorts in the affairs of the Commission,” he stated.

Esin stated that the idea of the government in undertaking the forensic audit of the NDDC was commendable, but that working with an Interim Management Committee (IMC) was absurd.

He expressed concerns over the horrendous revelations that have emanated from the investigations by the National Assembly (NASS) into the finances of the NDDC.

He vehemently warned against scrapping the NDDC, and called for the swearing in of the members of the Board earlier screened by the Senate to enable the Commission settle quickly into its role.

Read full statement by the President of the ULFA at the briefing below:

The Urhobo Leadership Forum Abuja (ULFA), is a think-tank Forum of Urhobo people resident in the Federal Capital Territory, Abuja. The body anchors its ethos amongst others, on the enhancement of the welfare of its members and the promotion of development, unity and peace among Urhobo people and foster cordial relationship with other ethnic groups, within the context of a peaceful, united and progressive Federal Republic of Nigeria.

We are very concerned about the horrendous revelations, which have emanated in the past couple of days, from the investigations by the NASS into the finances of the Niger Delta Development Commission (NDDC).

The revelations of massive looting of the hard-fought-for and won financial allocations made to the Niger Delta area which are reposed in the NDDC in trust for the long-suffering people of the area, is to say the least, shocking.

The ugly developments have led to aspersions being cast on all the people of the area as being somewhat complicit. As an indication of our embarrassment, consternation and indignation, the ULFA has critically examined the issues and hereby put forward our views on the state of affairs in the NDDC in particular, and the Niger Delta region in general.

The NDDC as an interventionist organisation, is vested with the mandate to bring about the overall development of the Niger Delta area and in particular conceive, plan and implement in accordance with enabling Act projects and programmes for the sustainable development of the Niger Delta area in the fields of transportation (including roads, jetties and waterways), health, employment, industrialization, agriculture and fisheries, and urban development. Similar responsibilities have been successfully executed in other wetlands of the world.

The NDDC Act 2000 (as amended) is a very comprehensive piece of legislation in all of its structure and inbuilt control mechanisms. The President, Board including representatives of oil companies), Management Committee, Advisory committee (comprising Governors of the area) and a Monitoring Committee (comprising public/civil servants) including other in-house provisions, ought to be sufficient for the effective management of the Commission, if at all those concerned have respect for law and are imbued with a sense of mission to turn the fortunes of the area around.

Unfortunately, the Commission has been perennially beset with problems since its inception and has thus failed woefully to impact on the quality of life of the people.

In this regard, the following points are noteworthy:

We observe that the Act setting up the NDDC has been held more in the breach than in the observance.

The idea of the Government in undertaking forensic audit is commendable, but working with an illegal IMC is absurd.

The National Assembly’s handling of the petitions that emanated from the Niger Delta indigenes and NGOs has shown that the Commission is a cesspool of corruption, rot and a conduit for perpetuating the despoliation and plundering of the resources of our people by a few Nigerian leaders and their cronies

There is no doubt that some members of the bureaucracy of the Commission may have been complicit by their connivance with members of the political class. This may have resulted in the declaration of fictitious projects completed and other corrupt practices

The ULFA notes also that the leadership of the NDDC has remained perennially unstable. Indeed, in its 20 years of existence, it has had 16 Chief Executives – an average of one MD every 1 year and 3 months. The development appears to ensure the turn-by turn looting of the NDDC.

We note with dismay the silence of the Governors of the Niger Delta region on the massive looting going on in the NDDC in spite of the fact that have statutory roles to play under the Act in the attainment of the developmental goals of the region.

It could be said that Federal government’s approach to the management of the NDDC after the expiration of the tenure of the last Governing Board gave rise to untoward developments. This is further exacerbated by the meddlesomeness of top government functionaries and their cohorts in the affairs of the Commission.

The intendment of the NDDC Act is subverted and jettisoned in favour of directives from those who exercise the Federal might. This has been with the connivance of some Niger-Delta elements, all of whom are unperturbed by the dire future of the people of the area when oil and gas exploration and production would have become a thing of the past.

The quality of persons appointed to the Board and the Chief Executive of NDDC leaves much to be desired. A situation where both the Board Chairman and Chief Executive of the Commission have been mainly politicians is inimical to the growth and development of the Niger Delta area. Apart from only 2, all other past Managing Directors have been politicians. The consequence is that they have continued to be lackeys and stooges of their mentors.

We like to conclude by emphasising that the NDDC is an interventionist created to fast tract development in the region This is in addition to the statutory responsibilities, which the Niger Delta States and the FGN owe to the region as part and parcel of the Nigerian Federation. But we note with pain and regret that both tiers of government have failed woefully in this regard Therefore, in the final analysis, the failure of the NDDC is NOT the only problem of the region.

In order to bring the rot and looting in the NDDC to an end and reposition it to effectively deliver on its statutory responsibilities, the ULFA hereby recommends as follows:

That sensitive positions in the NDDC management, such as the Managing Director/CEO, should henceforth not be given to active partisan political actors. Nevertheless, in light of the exigencies of the moment, the members of the Board earlier screened by the Senate, should be sworn-in without delay to enable the Commission settle quickly into its role,

A competent and reputable external audit firm should be engaged after the inauguration of the Board to execute the forensic audit of the Commission including top management officials since the inception of the NDDC.

The recommendations of the National Assembly’s investigation of the NDDC Interim Management Committee should be acted upon by the Executive branch of Government without delay,

All persons involved in financial embezzlement and misappropriation should face the penalty imposed by law, including forfeiture of improperly acquired wealth,

The audited accounts and reports of the NDDC should be undertaken and made available as stipulated by the enabling Act, 46 Government should strengthen the Commission’s financial management and internal control system. For example, in the implementation of the Procurement Act provisions against contract splitting should be rigorously enforced,

All major contracts or projects should be handled by reputable contracting firms, preferably in which the Niger Delta indigenes have substantial stakes,

Projects locations, completion status and costs should be regularly published on the NDDC portal and such information should be made available to the Niger Delta State Governments and the LGAS,

The Local Content of every project should be visibly verifiable,

The Commission should concentrate on mega projects with impact across create its own problems.

Therefore, this matter should be handled with the seriousness, equity and justice the situation demands so that there is no the Niger Delta area,

That NDDC must not be scrapped. The ULFA cautions that such an action will relapse or degeneration into the destructive militancy that predated the establishment of the NDDC.

Their Excellences, the Governors of the Niger Delta states should be more alive to their responsibilities of “advising the NDDC Board and monitoring the activities of the Commission for the equitable development of the Niger Delta Area as stipulated in the enabling Act.

Finally, the ULFA appeals to the people of the Niger Delta region to remain peaceful and calm as we await the Federal government to reposition the Commission to deliver on its mandate. 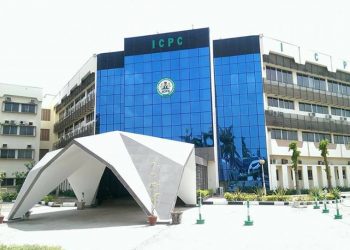