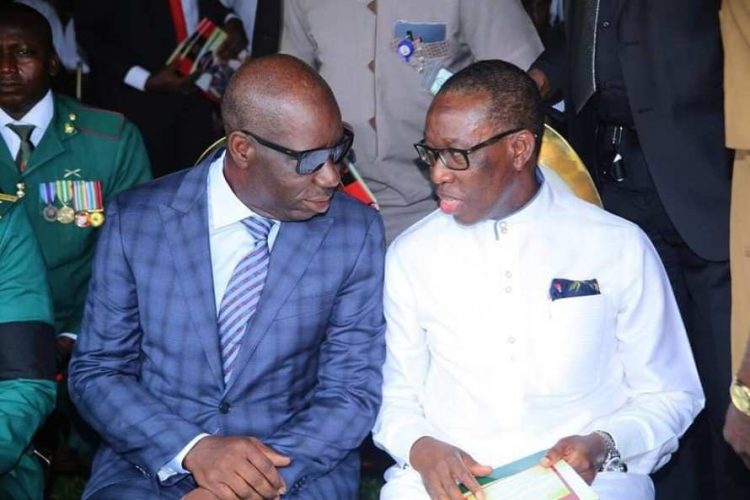 The Midwest Movement on  Saturday called for the immediate arrest of leaders of the Coalition of Northern Groups over their recent harsh reaction to the suspension of the RUGA initiative programme by President Muhammadu Buhari.
The movement particularly demanded the arrest of one Mr. Abdul Azeez Sulaimon who acted as the spokesman of the groups.
Recall that shortly after the suspension of the RUGA programme, the coalition on a live broadcast last week issued a 30-day ultimatum to the federal government and governors who opposed the initiative to reverse their decisions or face the consequence.
Abdul-Azeez Suleiman, the group’s spokesman in a press conference, said the debate to accept or not to accept the program is already causing disaffection for herders who are of Fulani extraction.
“While we warn all state governments that stand against the implementation of the Ruga Initiative to desist and give peace a chance, we place President Buhari and the Federal Government on notice that they must completely stop this raging madness within 30-days beginning from today, Wednesday,” Suleiman said.
Faulting the coalition’s position, the Midwest Movement said the security agencies should not waste time in arresting all the leaders of the coalition as their utterances were capable of setting the nation on fire.
TNG reports that the movement which comprises of Delta and Edo State Governments had earlier rejected the RUGA initiative. Other state government and groups also vehemently oppose it.
The region’s decision was revealed in a statement signed on behave of both state members by Don Pedro Obaseki.
Read full statement below:
RUGA SUSPENSION: THE SEDITIOUS THREAT OF THE COALITION OF NORTHERN GROUPS
The Midwest Movement (of the indigenous peoples of Edo and Delta States) hereby calls on  the law enforcement agencies to IMMEDIATELY arrest and prosecute one MR ABDUL AZEEZ  SULIMAN, the purported spokesperson of a so-called COALITION OF NORTHERN GROUPS,  and his collaborators who has threatened to harass and expel Southerners from the North of  the country following the Federal Government’s suspension of the obnoxious and unlawful  RUGA settlements programme. Mr Abdul Azeez Suliman’s unwarranted statement, which was  released via an online video on Wednesday 3rd July 2019 and broadcast on several news
outlets, is a serious threat to the lives of our peoples, as well as an attack on the peace of the  nation as a whole. It is not only reckless, provocative and utterly contemptible, it is also a  criminal act of sedition that MUST be promptly prosecuted in order to guarantee the fragile peace of the country.
We therefore remind the Federal Government of its sacred responsibility to protect the lives  of all citizens, irrespective of State of Origin and/or ethnic nationality. Failure to do so will be grossly irresponsible and a needless, yet avoidable descent to anarchy! It is incumbent on the Federal Government and its security agencies to act swiftly and decisively against Mr Abdul Azeez Suliman and the amorphous seditious group he claims to represent.
Any delay or  failure to do so by the Federal Government and the law enforcement agencies will amount to gross negligence and will expose the government to accusations of aiding and abetting a grand conspiracy against the lives and properties of innocent Nigerian citizens, particularly from a section of the country.
We of the Midwest Region of Delta and Edo States, wish to restate our total rejection of the ill-fated and obnoxious RUGA programme; which is nothing but a veiled desperate and unconstitutional plan to aggregate the lands of indigenous peoples all over the country and
transfer them to Fulani herdsmen who have been terrorizing many parts of the country, particularly within the last four years. The Federal Government MUST discard and abrogate the ill-fated RUGA Settlement Initiative in its entirety. In whatever guise this plot is presented in future (whether as RUGA or under any other name or form), we of the Midwest Movement and our peoples in Edo and Delta States will continue to resolutely resist it in every lawful way and with every resource available to us TO THE VERY END. We wish to make it clear that no amount of threat from any quarter will deter us in this regard.
From events of our most recent past, it is clear that Nigeria sits atop a time bomb that may erupt at the slightest prodding.
Consequently, we wish to remind the Federal Government, and the good people of Nigeria, of the urgent need for genuine and robust negotiations towards restructuring Nigeria’s skewed and fragile union, in line with the spirit of true federalism, and along the lines of the 1963 Republican Constitution. This is the ONLY WAY to rescue the country from the brink of chaos and collapse.
God bless the Midwest Peoples of Edo & Delta States. God bless Nigeria.