The South African police yesterday dispersed members of the Independent People of Biafra [IPOB] who had planned to embarrass the Nigerian President, Muhammadu Buhari during his visit to South Africa.

Protesters had gathered outside of the iconic landmark to make their voices heard; The group were demanding that Buhari addresses them immediately and wants him to also volunteer for a DNA test.

Minutes after boasting, #IPOB members seen running helter-skelter after being confronted by the S. African police while trying to protest against Pres. #Buhari, today, in #Pretoria

Meanwhile, IPOB announced that members of the group protesting against President Muhammadu Buhari’s visit to South Africa were on Thursday attacked by the South African Police with many of them also being shot.

Though the group did not give the figure of fatality, a statement signed by its spokesman, Comrade Emma Powerful described the incident as “barbaric and disgraceful”.

He said that the attack against peaceful IPOB protesters by South African police is proof that state-sanctioned politics of savagery has taken firm hold in Cyril Ramaphosa’s South Africa.

“This is a thoroughly ugly and distasteful development that pales White aparthied regime into insignificance in terms of its brutality and incredulity,” the statement said. 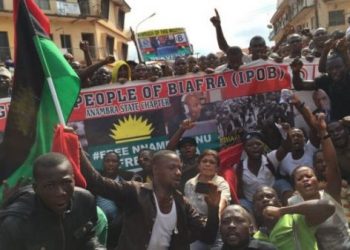