Security operatives on Thursday stormed the head office of Leadership Newspaper in Utako, Abuja on over an alleged N100 million debt owed to Senator Isa Mohammed from Niger State.

It was gathered that the senator had filed a libel suit against the media outfit and the court ruled in his favor four years ago, ordering the newspaper to pay N100 million in damages to the senator.

The operatives were said to be carrying out a court order which mandated the shutdown of the corporate headquarters of the news organization.

Witness at the scene of the invasion said the armed policemen raided the Leadership Newspaper building and carted away computers, documents, and printers from the newsroom and administrative department.

Vehicles belonging to the media organization were also confiscated by the officers.

The pre-press section of Leadership Newspaper was not affected by the raid.

The publisher of Leadership Newspaper, Sam Nda Isiah, has been the subject of scrutiny since some staff of the company instituted a court action against him for unfairly dismissing them and refusing to pay their backlogs of salaries. 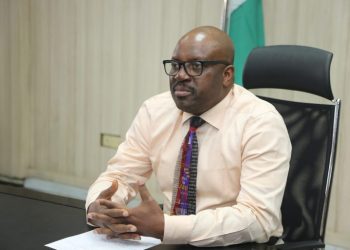