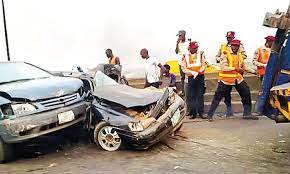 Seven persons have reportedly died at the Ogunmakin end of the Lagos-Ibadan expressway in Ogun State,

The accident, which happened just opposite the office of the Federal Road Safety Corps (FRSC) at about 5:40pm on Friday, involved a Mazda bus, with registration number, LSR696XS and a truck, marked T-4889LA.

The FRSC confirmed  that a total of 16 persons were involved in the accident, comprising 15 male adults and one female.

Florence Okpe the Ogun FRSC spokesman said about five men got injured in the accident while 7 confirmed dead.

According to her, Six adult men and a woman lost their lives in the accident.

“The injured victims were taken to Victory Hospital, Ogere for medical treatment, while the dead bodies were deposited at FOS morgue, Ipara.

“The suspected causes of the crash were excessive speed, which led to the loss of control on the part of the Mazda bus as it ran into the moving truck,” Okpe disclosed.

Ahmed Umar the FRSC sector commander in Ogun state has called for caution application of speed limit to avoid accident in this holiday period.

He urged travellers to thread with caution while going for  Eid al-Fitr celebrations.