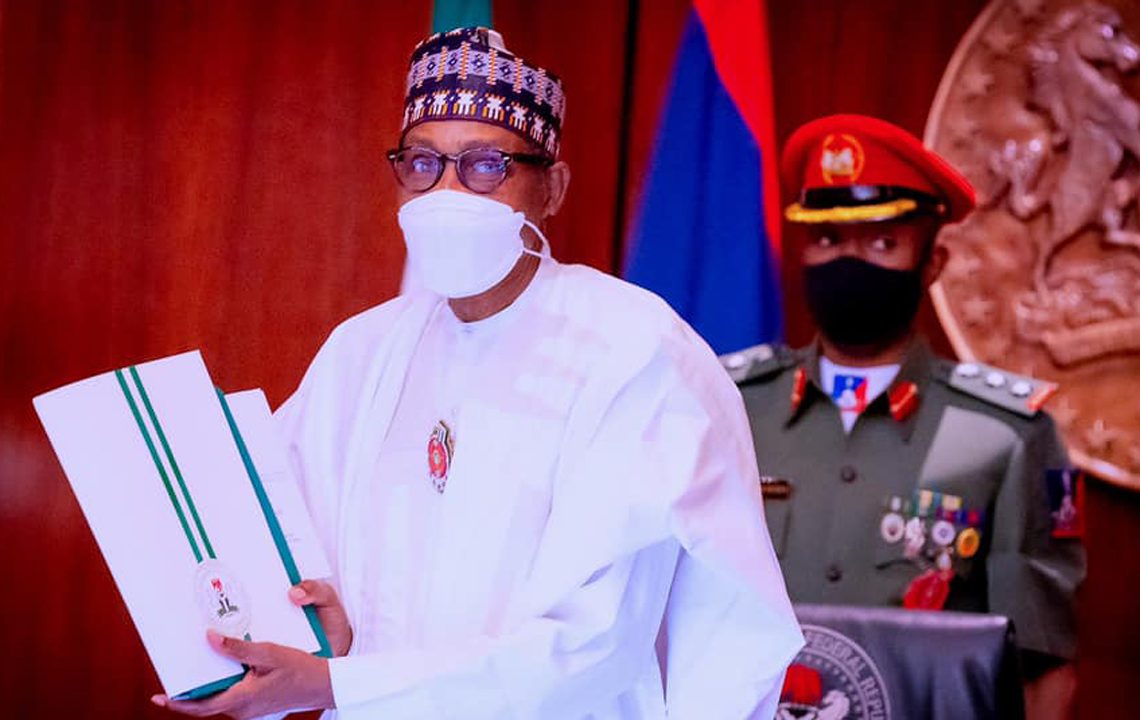 President Muhammadu Buhari has reassured Kaduna State residents of the resolve of the Nigerian Armed Forces, under his watch, to crush terrorists and criminal gangs operating in the State and other parts of the country.

The president’s media aide, Malam Garba Shehu, in a statement on Friday, said the president stated this at a State Banquet to commemorate his official visit to the state.

The president commended the support Kaduna State had been providing to security agencies, noting the establishment of a ministry dedicated to Internal security.

‘‘I wish to assure the people and government of Kaduna State that the Federal Government is doing its utmost to contain and crush the terrorists that have been menacing our citizens and their property in parts of the country.

‘‘On behalf of the Federal Government, I commend the efforts of the Kaduna State Government to respond to the demands of development.

‘‘The relationship between our tiers of government represents an instance of successful collaboration between the national and state governments for progress, peace and prosperity.

‘‘I urge Malam Nasir El-Rufai to push on and not relent in his efforts to accelerate change and progress in Kaduna State,’’ he said.

While reviewing his programme in the state since he arrived on Wednesday, the president said he was delighted to have inaugurated projects undertaken by the state government led by El-Rufai.

‘‘I have been most impressed by the consistent efforts of the Kaduna State Government to develop the state, to seek progress on so many fronts and to boldly confront challenges.

‘‘Most of my visits to Kaduna State since 2015 have been in connection with clear strides of progress.

”I was here in 2017 to commission the hatchery and feed mill project of Olam, a multinational agribusiness company that has sited a major factory in Kaduna.

‘‘In August 2019, I had the honour to commission Phase 2 of the Zaria Water Project and a road project.

‘‘Therefore, I am not surprised that Malam Nasir El-Rufai and his team have undertaken such a major investment in infrastructure development.

”I am glad to say that I have seen with my own eyes the remarkable changes across all the three Senatorial zones,’’ he said.

The president declared that he looked forward to inaugurating more and more projects in the state.

He lauded the Kaduna State Urban Renewal Programme ‘‘for its sheer audacity, breadth of imagination and quality of project execution.

‘‘Projects under this programme have been described as an unprecedented investment in urban infrastructure in the state.

‘‘When completed, these projects will define the city of Kaduna for the next 50 years.

‘‘State Governments have direct responsibility for the quality of life of the residents of their state. Kaduna State is providing an example of how this can be done.’’

While highlighting other achievements of the state government, the president said it was noteworthy that the hardwork of the present administration attracted 2.8 billion dollars in foreign investment to the state since 2015.

‘‘This was further confirmed by Kaduna State being ranked as the Number One state for ease of doing business in the last published World Bank Doing Business Report for sub-nationals in Nigeria.

‘‘We have also seen the El-Rufai government increase the internally generated revenue of the state by almost four times in five years, from N13bn in 2015 to N50.7bn in 2020.’’

On health, the president recalled the strong response of Kaduna State in the aftermath of the COVID-19 pandemic in Nigeria early in 2020, welcoming the completion of the 136-bed Infectious Disease Centre inaugurated on Thursday.

On education, the president noted that the state had also demonstrated commitment to equality of opportunity at the basic and senior secondary levels.

‘‘The policy of making education free and compulsory up to the completion of secondary school is a significant contribution to human capital development, and I commend it wholeheartedly.

‘‘I have been told that back in 2015, you inherited a school in the Rigasa area with reportedly over 20,000 pupils instead of the planned 1,500 pupils. We are impressed that Kaduna State Government has built more schools to accommodate these students,’’ he said.

In his remarks, Gov. El-Rufai called for further military action to stop the activities of terrorists in the State.

‘‘We have spent considerable sums to support federal security agencies in the State in order to promote the safety and wellbeing of our people.

‘‘We are implementing a Safe City project, created a Vigilance Service to provide community level security services and established a Ministry of Internal Security and Home Affairs to improve coordination among security agencies and intelligence sharing.

‘‘We believe that further military action and more boots on the ground are needed to stop the terrorists that menace our people.

”But as we tackle security, we must also move forward with the things that our resources and planning enable us to do to make life better for our people,’’ he said.

On ongoing road projects in the state, the governor informed the president that the Nnamdi Azikiwe Way (the old Western bye-Pass) is being reconstructed into a six-lane concrete highway by the Dangote Group under the President’s innovative Tax Credit scheme.

He, therefore, appealed to the president to direct the Federal Ministry of Works and Housing to end the two-year delay suffered by this project and give Dangote the go-ahead to start the construction and completion of the earthworks before the onset of the rainy season.

He added that vital projects to reconstruct the Kaduna-Birnin Gwari road up to the boundary with Niger state and the Birnin Gwari-Dansadau road, which passes through Katsina State and terminates in Zamfara State, were also stalled at the Federal Ministry of Works, despite the expressed readiness of the Dangote Group to work on them.

”This is to create the Third Ring Road of Kaduna from the Abuja-Kaduna Expressway behind the Rigasa Train Station and the Kaduna International Airport and terminating at the Kaduna-Zaria highway.

‘‘We need the commitment of the Federal Government to support this laudable project that will further expand economic opportunities for the people of Kaduna State and Nigeria at large,’’ he said.

The governor thanked Buhari for the working visit to Kaduna State as well as his unflinching support toward the development of the state.