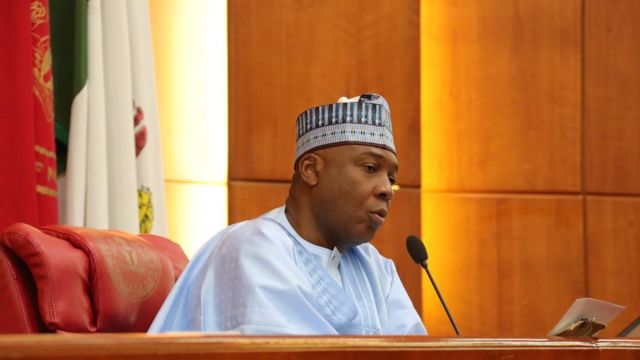 Nobody needs your jaundiced political views now – BMO to Obasanjo

1.6k
The Buhari Media Organisation (BMO) has accused the former President of the Senate, Dr Bukola Saraki, of re-writing history over the purchase of Tucano light-attack aircraft for the ongoing war against insurgency in the country.
The BMO made the accusation in a statement signed by its Chairman, Mr Niyi Akinsiju, and Secretary, Mr Cassidy Madueke, on Tuesday in Abuja.
It said Saraki was re-writing history in a bid to claim credit for the United States of America’s deal with Nigeria on the purchase of the Super Tucano light-attack aircraft for the ongoing war against insurgency.
This, it said, was in the aftermath of suggestions by Saraki that the $593 million deal might not have scaled through without his intervention as the then head of the 8th Senate.
The BMO said the facts on the ground showed that former U.S President Donald Trump had given his approval to the deal within one month of assuming office in 2017.
“It has come to our notice that former President of the Senate and presidential aspirant on the platform of the Peoples Democratic Party (PDP), Bukola Saraki, had been giving the impression that an intervention he spearheaded paved the way for the sale of the aircraft to Nigeria.
“While we understand that he needed to make himself look good at a time he is seeking his party’s presidential ticket, we make bold to say that the claim is far from the truth,” the BMO said.
It added that investigations showed that the then President Donald Trump had, within one month in office, assured President Muhammadu Buhari of his readiness to support Nigeria’s plan to procure the counter-insurgency aircraft.
“By April, there were reports in the international media that the U.S Congress would be notified of the sale in the coming weeks.
“So it was not surprising that the Defense Security Co-operation Agency notified the U.S Congress on August 2nd, 2017,” the statement said.
It added that this indicated who the contractors were and how the proposed sale would not have an adverse impact on U.S defence readiness.
The BMO recalled that the Senate under the watch of Saraki actually threatened to impeach President Buhari for making that move.
According to it, it all began on Aug. 25, when Buhari notified the Senate in writing that he had granted anticipatory approval for the release of $496,374,470 from the Excess Crude Account (ECA) directly to the Treasury of the U.S Government for the purchase of the 12 aircraft.
“The presidency and the ruling All Progressives Congress (APC) had explained it, in line with the principle of doctrine of necessity, and cited how previous administrations had taken similar steps.
“But the Saraki-led Senate threatened to impeach the president for making what it called extra budgetary spending.
“The impeachment threat was made through a motion by Chairman Senate Committee on Public Account, Sen. Mathew Urhogide,” the statement said.
It said this was however countered by APC Senators led by Sen. Abu Ibrahim who insisted that since the establishment of the ECA, no government had sent a formal request to the National Assembly for approval for appropriation of funds.
The BMO said it was not until about four months after the deal was sealed, that the Senate leadership showed any form of support when a U.S congressional delegation came into the country.
“So it beggars belief that Saraki could seek to claim credit for the purchase of counter-insurgency aircrafts that he tried to block on the grounds of extra-budgetary approval,” the BMO stressed.
It added that the PDP presidential aspirant should look for something else other than the Tucano jets to convince his party members to give him their support.
Tags: BMOBukola SarakiPresident Muhammadu BuhariTucano aircrafts
SendShare118Tweet74