- He diverted all to his warehouse, says NDDC's ED 142
SHARES
3.5k
VIEWS
Share on WhatsAppShare on FacebookShare on TwitterShare on LinkedInShare on TelegramSend as Email

The Executive Director in charge of Projects and members of the IMC of Niger Delta Development Commission(NDDC), Dr. Cairo Ojougboh on Monday accused Sen. Peter Nwaoboshi of diverting plastic chairs belonging to the Federal Government of Nigeria worth the total sum of N3.7BN.

Ojougboh who made the veiled accusation during an interview session on Arise TV alleged that the contract was given to a senator in 2018 (Nwaoboshi), stressing that the plastic chairs have been traced to a warehouse allegedly belonging to the said lawmaker.

The named lawmakers include the Chairman of the Senate Committee on Niger Delta, Peter Nwabaoshi, whose name was listed against 53 projects.

The former Chairman, House of Representatives Committee on the NDDC, Nicholas Mutu, was also named by the minister as receiving 74 contracts – the highest among the listed lawmakers.

Some of the projects are emergency roads in Delta, Akwa Ibom, Bayelsa and Rivers states.

A few others were simply identified as Ondo and Edo Reps. 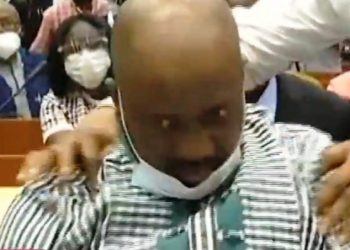