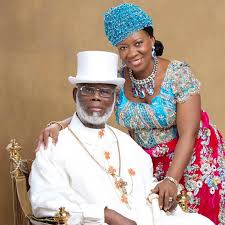 The Rivers State Chapter of the African Women Lawyers Association (AWLA) has condemned in its totality the persecution of Dr Mrs Seinye O. B. Lulu-Briggs, the wife of late High Chief O. B. Lulu-Briggs.

The organization through its Rivers State Secretary, Hilda Desmond Ihekaire (MCArb) while speaking on a live radio programme discussing proposed amendments to the Dehumanizing and Harmful Traditional Practices Law of Rivers State No. 2 of 2003 said, as can be seen in society, highly placed women just like other female members of society are not spared the dehumanization attributed to harmful traditional practices necessitating the need for all hands to be on deck to end the societal scourge.

According to her the proposed amendment to the bill being sponsored by Hon. Sam Ogeh of Emohua Constituency is a welcome development and will go a long way to strengthen compliance with this law.

The Rivers State House of Assembly in 2003 passed the Dehumanizing and Harmful Traditional Practices Abolition law No. 2 to proscribe harmful traditional practices against persons in Rivers State.

She said the law proscribes the maltreatment of women after the death of their husbands such as causing them to cry at guided intervals, drinking water from the corpse of their husbands, shaving of their hairs, ostracizing them, being forced to abstain from personal hygiene, sitting on broken coconut, swearing before a shrine of their innocence, prevention from inheriting husbands property amongst others.

“In Africa generally, Rivers State is not an exception, once a man dies they just feel that it is the woman that has killed the man. So they make her go through all sorts of dehumanizing practices. It doesn’t even matter whether you’re a village woman or the high and mighty. As we can see with the death of O. B. Lulu-Briggs, they are trying to impute that his wife killed him. It is not acceptable. These mistreatments as we can see affect all women irrespective of their status in life. This is why AWLA is supporting the amendment of the bill to protect the rights of women.”

“The law was initially passed with a penalty of imprisonment or the option of a fine of N10,000 in some cases. However, that failed to stem the trend and thus she calls for the proposed amendment with stiffer penalties and without an option of fine,” she said.

AWLA further called for the inclusion of women into the cabinet of traditional rulers across Africa in order to help women have a say in making laws and taking decisions that affect them as it is with some African countries already.

According to a statement released by Cordelia Eke, the Rivers State Chapter Coordinator of AWLA, the Organisation is joining women groups and NGOs around the world to commemorate the 16 Days of Activism Against Gender-Based Violence.