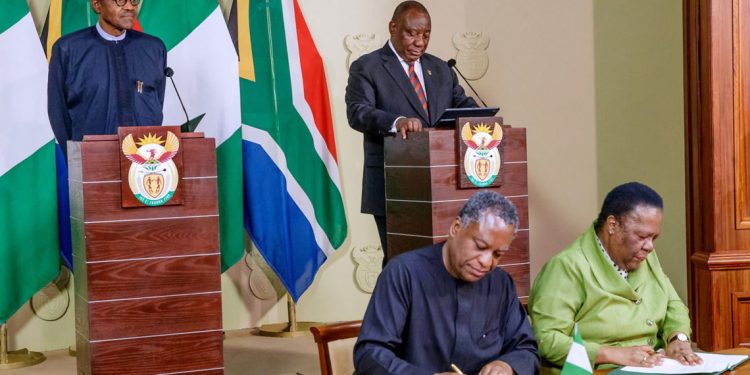 …victims likely to get compensation

They agreed to set up “early warning mechanisms” to detect hostility between South Africans and Nigerians to avoid recurrence of violence.

Buhari travelled to South Africa following diplomatic tension between Pretoria and Abuja, a situation that forced the evacuation of about 600 Nigerians.

While the President expressed his condemnation for the violence against Nigerians, Ramaphosa said Nigerians living in South Africa should respect the law.

He vowed to ensure there is no recurrence.

Ramaphosa said: “We have expressed our deep regret at the events of the past few weeks that manifested themselves through attacks that were directed at foreign nationals and our condemnation of all forms of intolerance and acts of violence remains very, very firm.”

Nigeria recalled its high commissioner and evacuated some of its citizens last month after a spate of attacks left at least 12 people dead, sparking protests in Nigeria that targeted South African companies, including MTN and Shoprite, which were forced to temporarily close shop.

Buhari condemned “the very few incidents of retaliatory attacks”, saying: “We took strong and decisive measures to stop the attacks and prevent any recurrences.”

He deplored “in the strongest terms, attacks against Nigerians and other African nationals living in South Africa, the looting of their shops and businesses and burning of their properties”.

The President added: “We call for the strengthening and implementation of all the necessary measures to prevent the re-occurrence of such action which threatens to undermine, not only our strong bilateral relations but also, what we stand for in the context of our vision for a strong and prosperous Africa we want.”

Buhari agreed to set up a committee to address the issue of compensation to the victims, though South Africa was yet to formally agree to Nigeria’s reparation request, it was learnt.

The issue was not mentioned in the joint communique issued at the end of the meeting, but a source who was part of the delegation but prefers not to be named said it was agreed that a committee on compensation is set up.

In the communique, both leaders condemned the violent incidents and the destruction of property. They reiterated their call for heightened law enforcement.

The two presidents endorsed the establishment of an Early Warning Mechanism and directed the two Foreign Ministers to give practical expression to it.

They endorsed the reestablishment of the Republic of South Africa and the Federal Republic of Nigeria Consular Forum to meet twice a year.

Buhari arrived in South Africa on Wednesday on Ramaphosa’s invitation.

He attended the inaugural elevated Bi-National Commission (BNC) session, which he co-chaired, as part of continuing bilateral engagements aimed at deepening cooperation.

The communique says Ramaphosa alluded to the fact that the unfortunate incidents were not consistent with the values and principles underpinning South Africa’s constitutional democracy.

Ramaphosa assured his counterpart that the South African government was fully in control of the situation and that several interventions and engagements with the diplomatic community were underway.

Speaking at the ninth BNC at the Union Building, the seat of the presidency in the capital of Pretoria, Buhari urged the South African government to open up its economy for more Nigerian businesses and to protect them.

Buhari said: “We are pleased to inform you that our government has made doing business in Nigeria easier through the Ease of Doing Business Initiative to open up more opportunities for investors in Nigeria.

“We call on the Government of South Africa to also take steps to ease the doing of business in the country, and open up its market space for Nigerian businessmen and women.”

According to Buhari, Nigeria would continue to value its relationship with South Africa.

No fewer than 32 agreements and Memoranda of Understanding (MoUs) were signed during the visit.

Buhari said: “We, in Nigeria, value the warm fraternal relations binding our two countries and cherish our Special relationship. We consider South Africa an ally and a strategic partner.”

He called for increased collaboration against arms and drug/human trafficking and money laundering.

Ramaphosa said the attacks were regrettable, assuring that his government would do more to safeguard lives and property.

He said: “We will always be grateful to Nigeria for the support we received during the dark days of apartheid. We shall never forget the role you played to ensure that our people get the freedom we are enjoying today.”

He said South Africa would create a more enabling environment for Nigerian businesses to thrive, acknowledging that more South African companies operate in Nigeria, while Nigerians were mostly in small and medium scale sectors in his country.

He promised to deepen the reforms in his country to open the space for more Nigerian business to “address the imbalance”.

Nigeria is South Africa’s largest trading partner on the continent, with trade flows estimated at $4.48billion in 2018.

According to data from the Stellenbosch-based Trade Law Centre, only nine per cent of Nigeria’s total trade is intra-African, and almost half of that is with South Africa.

Nigeria is said to account for 64 per cent of South Africa’s total trade with the West African sub-Region.