Home » Nigeria » You cannot be trusted with another bail, court rejects Maina’s application

You cannot be trusted with another bail, court rejects Maina’s application 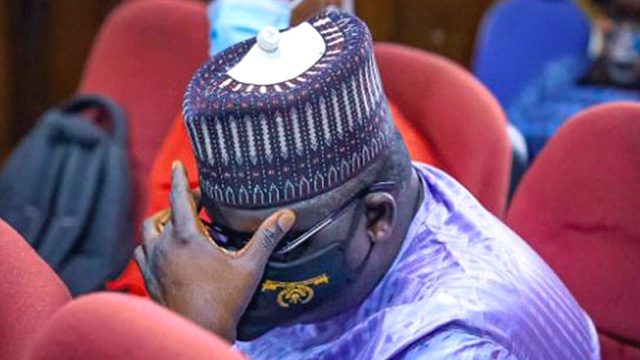 480
Justice Okon Abang of the Federal High Court, Abuja, on Thursday, told Abdulrasheed Maina, former Chairman, defunct Pension Reformed Taskforce Team (PRTT), that he can not be trusted with another bail after jumping the first granted him.
Delivering ruling, Justice Abang, said Maina had disappointed the court in his conduct.
“Having considered the facts placed before me, the first defendant cannot be trusted with another bail.
“He is not only a potential flight risk but a proven flight risk.
“A defendant who fled the country while his travel documents were deposited in court cannot be trusted with another bail.
“He has disappointed the court,” he ruled.
He said Maina fled to the Republic of Niger and Chad in violation of the court order, while claiming that he travelled to the countries for the treatment of his kneel.
He said in the argument of the Economic and Financial Crimes Commission (EFCC)’s lawyer, Mohammed Abubakar, Maina fled to Niamey, Niger Republic, to obtain a new travel documents with the aim of fleeing to the United States of America.
Justice Abang held that the application lacked merit.
He said though it was at the court discretion to grant bail, the ex-pension reformed boss did not deserve a bail after jumping the first bail.
According to him, Maina did not place sufficient materials before the court to convince the court that he deserves the second bail.
He said the medical report brought from the University of Abuja Teaching Hospital showed that Maina was not under any medical emergency.
The judge said Maina’s medical report, which was attached to a further affidavit instead of an affidavit in support of the bail application, was silent on the purported knee injury which the defendant claimed he suffers.
The judge also said the medical report did not show that the ailment the defendant suffers cannot be treated by any medical facility within the country.
According to him the court cannot take another risk in granting the 1st defendant bail.
“The application lacks merit and it is accordingly dismissed,” Abang ruled.
Justice Abang, who refused to grant Maina’s application for an order directing the Economic and Financial Crimes Commission (EFCC) to release his confiscated property, including a BMW Car, also dismissed his request for an order to set aside the Nov. 18 and Dec. 4, 2020 orders.
The judge the application to vacate the court order made to continue to hear the case in his absence lacked merit.
Abang said Maina’s former counsel, M.C Agbo from the chambers of Joe Gazama, consented to the trial in absentia.
“An order made with the consent of counsel cannot be complained about.
“The subsisting order made with consent of counsel cannot be spent or set aside. It is not even appealable except with the leave of the court.
“The application is a nullity,” he held.
In addition, the judge earlier dismissed his application seeking the vacation of the order directing him to be remanded in Kuje Correctional Centre pending the hearing and final determination of the matter.
Justice Abang, who adjourned the matter until March 1, ordered Maina to open his defence.
TheNewsGuru.com, TNG reports that the court had, on Nov. 18, 2020, ordered the trial of Maina in absentia after he jumped bail.
Also on Dec. 4, 2020, the court ordered Maina, after he was rearrested, to be remanded in prison custody pending the hearing and final determination of his matter.
But Maina, who jumped bail and fled to Republic of Niger around September last year before his rearrest, had on Dec. 24, 2020, applied for another bail.
Maina, through his one of his lawyers, Anayo Adibe, on Jan. 20, approached Justice Abang in a motion on notice.
He argued that the application became necessary over his worsening health condition.
In the motion, the ex-pension boss told the court that he had reasonable and responsible sureties who were willing to act as sureties if granted bail.
Debunking the argument that he had jumped bail, Maina said he only travelled to the Republic of Niger to have a kneel surgery done.
He claimed that If the knee surgery had not been done, his leg would have been amputated.
Tags: ApplicationBailCourtMaina