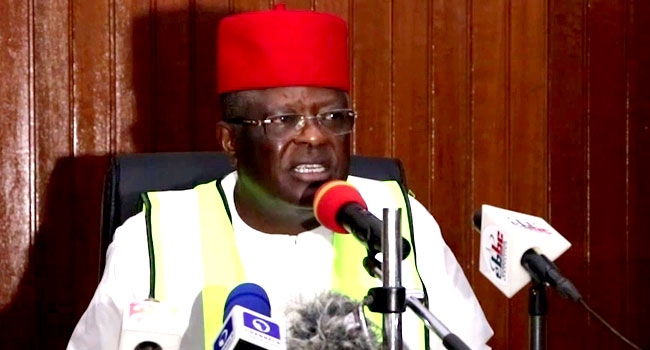 Governor David Umahi of Ebonyi State on Monday announced the sack of more than 1,000 aides for non-performance.

He said the dissolution would take effect from August 1, 2020.

Umahi made the announcement in Abakaliki during a virtual swearing-in of some Special Assistants and Caretaker Chairmen of Local Governments, among others.

He noted that governance of the state was no longer “business as usual”.

”We have over 1,000 of you, over 350 LGA liaison officers and several Development Centres management committee members, yet myself and my deputy threw ourselves ‘in the ring’ on the COVID-19 issue.

”I don’t know where else you will get a position, where you will just sleep and wait for bank alert,” he said.

The governor noted that the affected aides who wished to re-apply for the positions must be endorsed by a State Government’s ministry or department.

”We will hold such ministry or department responsible on you and you must have and show us your farm, if you wish to re-apply.

”People who were never in these categories of aides should not apply because I will not expand such offices. But if we don’t fill all the positions, we will then call for nominations,” he said.

Umahi, who used the occasion to sign the revised state 2020 budget, thanked God for the conclusion of its process, describing it as stringent, citizens- based and highly Information Communication Technology-compliant.

”The budget, which was reduced from N178 billion to N132 billion, was occasioned by the realities of the times as some sectors such as heath and education were reviewed upwards.

”I am categorically declaring that schools in the state will not re-open presently and we have commenced the process of using the communities to clear the primary and secondary schools surroundings.

”We shall send medical teams to inspect and do sample testing of teachers, while directing that the syllabus of primary and secondary schools be reviewed,” he said.

Chief Francis Nwifuru, Speaker of the State House of Assembly, commended the executive arm of government for its support in ensuring the speedy, even though painstaking, review of the budget.

He also commended members of the House for their patience and diligence during the review, noting that the House effectively engaged relevant Ministries, Departments and Agencies (MDAs) for an effective process.

Mr Orlando Nweze, Commissioner for Finance, said that the budget would be effectively implemented in spite of the uncertainties of the times, noting that it followed laid-down World Bank stipulations.

The fruitlessness of an Okonjo-Iweala leadership of WTO, By Owei Lakemfa