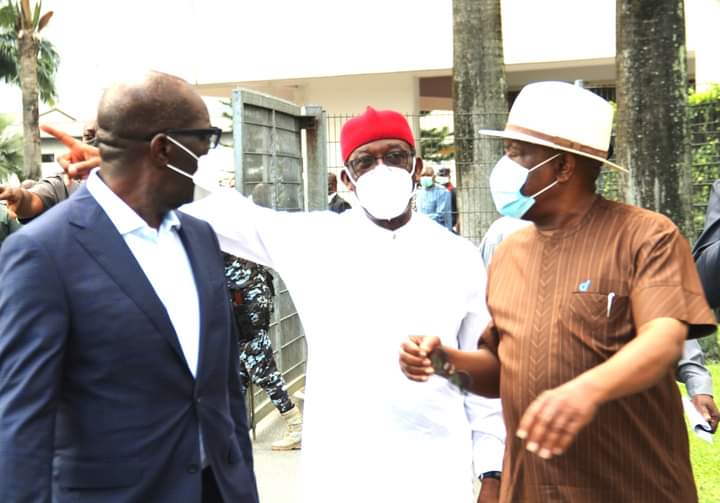 123
SHARES
3.1k
VIEWS
Share on WhatsAppShare on FacebookShare on TwitterShare on LinkedInShare on TelegramSend as Email

Leaders in the South South region of Nigeria have dropped 7 demands on the federal government.

The leaders made the demands at a Presidential meeting held in Port Harcourt following the sales of gold by the Zamfara State government to the Central Bank of Nigeria (CBN).

The Chief of Staff to President Muhammadu Buhari, Ambassador Ibrahim Gambari led the federal government delegation to the meeting.

The six Governors and leaders in the zone in a common position presented by Chairman of South South Governor’s Forum, Gov. Ifeanyi Okowa, made the following demands:

NIMASA – A metaphor for why Nigerian governments fail – Dele Sobowale

1. Immediate relocation of headquarters of oil multinational to their operational bases in the South South region.

2. Immediate relocation of government -owned oil subsidiaries from Lagos and Abuja to the South South region.

4. Immediate privatisation of the two refineries in Port Harcourt and the one in Warri for effectiveness.

5. Call for release of all funds due NDDC and that henceforth, all NDDC projects MUST be done in consultation with State Governors.

6. Reactivation of sea ports in Calabar, Port Harcourt and Warri. Then, the Lagos to Calabar railine.

Leaders of the South-South on Tuesday, insisted on restructuring of the country and true federalism, including devolution of powers to the federating units.

The leaders made the demand at a consultative meeting with a Federal Government delegation with governors, ministers and other stakeholders from the region at Government House, Port Harcourt.

Chairman of the South-South Governors’ Forum and Governor of Delta, Senator Ifeanyi Okowa, who presented the region’s demand, said that the nation was not at peace because the country had failed to practice true federalism.

Okowa said that it was time to restore the country back to a true federation with all the attributes and nuances of a federal state.

“For us in the South-South, the #ENDSARS protest is a metaphor of almost all that is wrong with us, our refusal to properly understand issues, and imbibe and entrench the virtues of justice, fairness and equity.

“The previous system of true federalism was jettisoned and it created a powerful center controlling and distributing all the resources unevenly.

“There was now a strong desire to restructure the country in order to guarantee peace, security, stability and progress of the nation.

“The region demands true federalism and devolution of powers to the states, including creating and managing their own police and security architecture, true fiscal federalism guided by the principle of derivation, revenue sharing and control of resources by each state,” he said.

He decried the deliberate lack of understanding, empathy and uncompromising attitudes of some Nigerians, who refused to understand the peculiar challenges of the South-South region, especially the degradation of the environment and the pollution of our waters.

“All we demand and ask for is fairness and equity and as we await actions to restructure the country, we hereby renew our demands for: ‘The relocation of the headquarters of major oil companies in Nigeria to the region; relocation of several NNPC subsidiaries from Lagos and Abuja to the region.

“The region further requested the completion without delay of the East-West Road and all federal roads in the region; Construction of the Lagos-Calabar railway, reconstruction and rehabilitation of the region’s major seaports notably the Port Harcourt, Calabar and Warri”.

The leaders also demanded the privatisation of the Port Harcourt and Warri refineries after several failed turn-around maintenance attempts.

The region called for the release of all funds owed Niger Delta Development Commission (NDDC) and for the amendment of the NDDC Act to place the commission on a first-line charge.

The stakeholders decried  annual flooding challenge in the region and called for the establishment of buffer dams to control flood waters in the region.

They also called for the completion of the abandoned Gas Revolution Industrial Park at Ogidigben and the stepping down of electricity at the Okpai and Utorogu gas plants.

Leader of the Presidential delegation and Chief of Staff to the President, Professor Ibrahim Gambari, thanked the people of the South-South for their co-operation, and assured that all issues raised at the meeting would be communicated to the President.

Gambari apologised for the failure of the meeting to hold on Nov. 17 earlier slated, and said “we are here on behalf of the President as part of the ongoing and continuing conversation on how to make our nation better and I must thank the Governor of Delta, Senator Ifeanyi Okowa, for his tireless effort in ensuring that this meeting held.

“Our youths took to the streets to express their bitterness on ill-treatment meted out to them by the police and the President, recognising the importance of the demands made by the protesters agreed to implement the five demands.

“All over the world, people have right to protest but in doing so, the respect for law and order must be adhered to and they must also respect the rights of others.

“The President commends governors, traditional rulers and other stakeholders for their role in handling the protesters,” he said

Deputy President of the Senate, Senator Ovie Omo-Agege, on his part, commended the youths of South-South for their peaceful disposition during the protests.

He assured that all constitutional issues canvassed would be addressed by the Constitution Review Committee and urged the governors to prevail on their Houses of Assemblies to give the necessary concurrence at the appropriate time.

He added that 65 civilians were killed during the protests and

On his part, Director-General, Department of State Services (DSS), Mr Yusuf Magaji-Bichi, said the unity of the country, in spite of the diversity, remained the strength of the nation, adding that all hands must be on deck to ensure that peace returned to the country.

Rivers State Governor, Nyesom Wike, in a vote of thanks, commended the Federal Government delegation and stakeholders of the region for attending the meeting and urged the federal authorities to ensure implementation of the region’s demands.

NIMASA – A metaphor for why Nigerian governments fail – Dele Sobowale