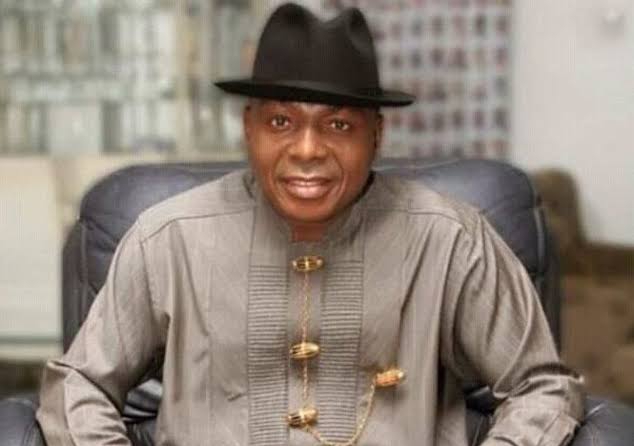 Senator James Manager a lawyer  is one Nigerian lawmaker that has remained steadily progressive in his parliamentary duties since 2003.

He talks less but remains firm when he is trying to drive home a point during debates in the Red Chamber.

Last year, Manager sent chilling messages across Delta state when he told a former Governor of Delta State they should meet in the field to determine who will represent Delta State South senatorial district.

They met on the field and Manager triumphed and they went to court he still trumped the former Governor.

A clear signal to all that he is still very relevant in Delta politics and has more qualitative services to offer Deltans.

He has chaired so many sensitive committees  in the Senate and excelled and as a fourth timer the Delta born Senator is still waxing stronger everyday.

James Manager Ebiowou completed his primary education at Epiekiri Primary School Ogbeinama in 1974 and proceeded to School of Basic Studies, Port Harcourt where he got his WASCE. Thereafter, Manager Ebiowou moved north to attend Ahmadu Bello University Zaria, where he obtained a degree in Law and then completed Law School  in 1987, afterwhich he was called to the Nigerian Bar.

Later on, Senator James Manager Ebiowou went to the University of Lagos, in Nigeria where he had his Masters in Law.

James Manager started out his career in Legal practice as a member of the NYSC serving with Derin Ogundeji & co. Chambers in 1987 after which he briefly taught at River Ramos Grammar school  in 1988 and also worked as a legal practitioner with Broderic Bozime & Co,

Manager then became chairman of Bomadi Local Government Council in 1991. He was appointed Honourable Commissioner for Social Development from 1992 to 1993 and then Chairman of GDM from 1996 to 1998.

He was the Delta State Chairman Peoples Democratic Party from 1998 to 1999 and then the Commissioner for Works, Housing and Transport from 1999 to 2003.

After his first tenure, he was re-elected, still on the platform of the PDP in the 2007 National Assembly elections.

He successfully ran for re-election again in 2011 and 2015 respectively, all on the platform of the Peoples Democratic Party.

He also ran in 2019 and defeated a former Governor of the state.