Of Prayer, Politics and Nigerian Youths – By Emma Esinnah 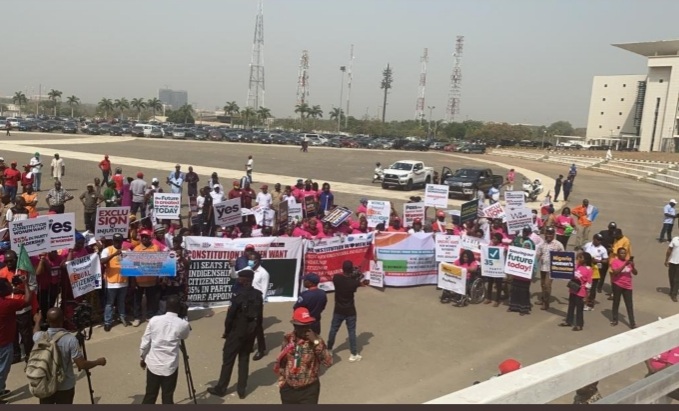 For a moment, let us focus on our youths. In the political space, one hears comments like “the future belongs to the youths’ or the talk about “giving the youths a chance in the politics of the nation”.  If we honestly believe that the youths represent our future, and critically look at the conduct of majority of the Nigerian youths of today, our prayers would become more earnest and more fervent.

We see a number of Nigerian youths who epitomize resilience, enterprise and creativity, both within Nigeria and outside our shores. They have done it in technology, the arts, finance and entertainment. Unfortunately, these shining stars are less visible; less audible. We also wish we had more of such people.

But an uncomfortably large number of our youths, especially those calling themselves leaders of the Nigerian youths, are a bunch of greedy, godless and selfish beings. They have shown themselves to be no better than the current politicians that we justly vilify. Obviously, the fathers and the sons are smoking from the same pipe and drinking from the same chalice – there is hardly any difference between them. And a few instances here will justify the need for more prayers.

Recently, Nigerians in South Africa were targets of Xenophobic attacks in that country. Some Nigerians there lost everything – livelihood, limbs and lives! Nigerians at home were understandably incensed. As part of the reactions that trailed that incident, a group of the so-called Nigerian youths, under the aegis of a student body, threatened reprisal attacks against South African interests in Nigeria. They actually mobilized and started. Somehow, someone reached out to them to “calm down and come for a meeting”. At the meeting, you would think these “leaders of Nigerian youths” would demand a guarantee of the safety of their country men living in South Africa. You know what they asked for? Scholarship for themselves to go and study in for master degrees in South Africa! Even the foreigners they were talking to were embarrassed on behalf of our country.

By the way, when was the last election of the National Association of Nigerian Students (NANS) national executive done? There are allegations that the people on the executive now are no longer students, but the allure of the office is too much to resist. Time there was when NANS was such an authentic, credible voice of the Nigerian students. Nothing mattered to NANS executive as much as the well-being of the students, and by extension, the youths of Nigeria. But not the NANS of today. Today, they are a youth wing of the government in power or the opposition, depending on the state the university is located.  Today, the ills we lament among the politicians in Abuja and the state capitals are rife among the politicians on campus, in the name of the student union governments. If you have been following the stories of the scandals in the student union governments in the various universities you would truly worry about the future of our country. In some universities, the Student Union Presidents have First Ladies! Youths! They actually go about in sirens and use exotic cars! In fact, you would be ashamed to hear about the perfidy in the departmental associations presided over by our youths. So, what is the difference between them and the ones you would have loved them to replace? They are obviously worshipping at the same shrine and bowing down to the same gods of debauchery and materialism.

For a moment, let’s leave out the youths in the universities. Let’s step down to the secondary level. Did you read about the school in Lagos that wanted to appoint a Head Girl. A particular girl, Bose (not real name), was favoured by the teachers- she was brilliant, disciplined, neat, well-spoken, good-looking. The ideal Head Girl. The teachers believed that the girl was equally popular with her fellow students. And she actually was. In an effort to help the students imbibe the tenets of democracy, the teachers decided to hold an election for the post, convinced that their candidate could never lose. On the day of the election, there was another candidate. The second candidate and Bose presented their manifestoes. The teachers were very pleased with themselves because Bose outperformed her challenger in every respect. The students were asked to cast their votes. To the surprise of the teachers, Bose lost the election. Why? Why? Why? The other candidate bought Gala sausage rolls for the students, Bose did not. She lost the election. And this is secondary school! Not APC or PDP presidential primaries. And you think we should not be praying?

So far, we have looked at the Nigerian youth in the education sector. When you look beyond that, you find more need for prayers. The mindless pursuit of money has driven our youths into all kinds of abominable things. Youths are using their own girlfriends and boyfriends for money ritual. Youths are involved in internet fraud, otherwise called “Yahoo! Yahoo!” What about drugs? What about being thugs to politicians? Many of them are prepared to do any and everything just to get money to buy 2004 model of Lexus SUV and big phones, and to live large on the social media. For the girls, the sign of having arrived is if you can talk rot and wear revealing clothes, and dance erotically.

As we look to 2023, many are saying look toward the youths. Unfortunately, there doesn’t seem to be a difference between father and son. The so-called youths, especially those who have become vocal, for the reason of their involvement either in student politics or youth wings of the various political parties, are no better than the old brigade of politicians. The same debauchery, vainglory and greed that hallmark our politicians have been detected in cancerous proportions in the vital organs of our youth bodies. So, in 2023, we do hope and pray that individuals will qualify to be voted for, not because they are called youths, but simply because they are God-fearing people, no matter the age category they belong to. At the end of the day, it is the fear of God that restrains men from evil, especially in an environment where there is no consequence for aberrant behaviour in public office. As desirous as it would have been, we are not looking to the youths to deliver the nation from the quagmire it has thrown itself into. The youths we are looking at today, especially those getting involved in politics, do not show any promise that they will be any better tomorrow than the worst politician you see today. The more you think about the decadence, the more you ask yourself, if we don’t pray more, what then? Certainly, there are some things we need to do more of, but we cannot do less praying! The middle ground would be as St. Augustine would say, to “ pray as if everything depended on God and work as if everything depended on us”.

6 quick tips to do rice farming, yourself