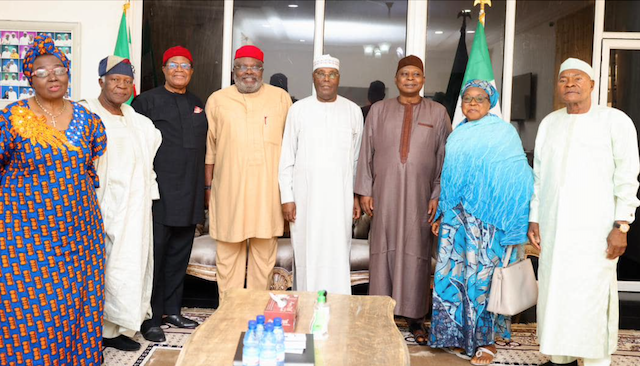 Presidential candidate of the People’s Democratic Party (PDP) on Sunday met with some members of the party’s Board of Trustees led by the Acting Chairman of the BOT, Sen. Adolphus Wabara.

Governor Wike’s group is made up of four (4) governors of the PDP opposed to the current status quo within the party. They include Governors Samuel Ortom of Benue State, Ifeanyi Ugwuanyi of Enugu State, Seyi Makinde of Oyo State and Okezie Ikpeazu of Abia State.

The Nyesom Wike-led group was received at the Akanu Ibiam Airport by the Enugu State Gov. Ifeanyi Ugwuanyi and the meeting was held behind closed door at the Government House, Enugu apparently on a new strategy for the party.

The meeting, described as crucial, is coming barely one week after PDP presidential candidate, Atiku Abubakar visited the state.

The Governors held the closed door meeting for a few hours and refused to speak with newsmen at the end.

The PDP has been in crisis since its presidential primary in May.

The opposition governors had insisted on the resignation of the National Chairman of the party, Iyorcha Ayu, since the emergence of former Vice President Abubakar.

The group also boycotted the inauguration of the party’s presidential campaign council held on Sept. 28.

The outcome of the meetings is yet to be public at the time of filing this report.