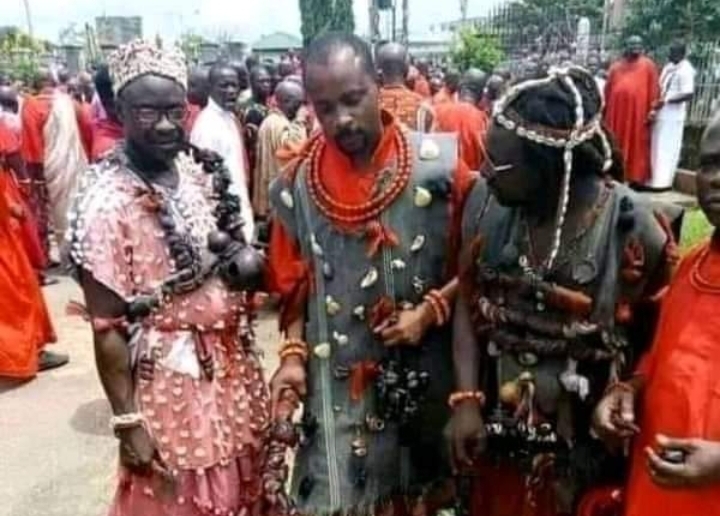 A group of native doctors and traditional religion practitioners under the aegis of Ofor N’Ogu Ndigbo Amaka Cultural Association have expressed their readiness to render support to the political class from the South East geopolitical zone of Nigeria.

President of the Association, Traditional Doctor Anthony Uzokwe dropped the hint in during an interview at a get-together of the association that held at Ojoto, Idemili South Council of Anambra State.

Uzokwe stressed that they are ready to build bridges ahead of the 2023 general elections to ensure that one of their own clinches the coveted seat of the president.

The group said they want to play active role in the quest to successfully get the backing of other parts of the country in getting a President from the South East area in the coming 2023 general elections.

Uzokwe said that though they are not politicians, “…but we are part of the citizens of Nigeria and all that affect other people affect us too.

“Our membership cut across age, gender, social class and continents, hence we cannot pretend. We are ready and well positioned to use our large membership base that spread to all states of the Federation, and countries of the world to build political bridges across Nigeria.

“And that will make it easy for an acceptable and sellable presidential candidate to emerge from the South East zone”.

Uzokwe further disclosed that the association was set up by people of like minds to come together, pray and pour libation to the progenitors and ancestral forebears for healing, development, peace and justice to be restored to Nigeria, especially Igboland.

Chief Uzokwe said that the Ofor mandate which was handed over to them from Agu-ukwu Nri was meant to do good and to eliminate every form of negative and atrocious acts from our communities.

The Vice President of the group, Ozo Omekannia, Stone N’Omor in an exclusive interview said the group stands for the uplifting and preservation of culture, custom and tradition of Ndigbo. Was hopeful that with wider sensitization, every form of abominable/negative tendencies and anti-social acts would be eliminated.

On the coming general election, he noted that since other key zones in the country have taken their turns on the seat, fairness demands a collective support for the South East to mount the saddle in 2023.

Chief Chinedu Ihekigbo, Agu N’Eche Mba of Uli in Ihiala Council of Anambra State said the group was set up to uplift and preserve the restoration of Igbo custom and tradition.

Ihekigbo who is also the chairman of the diaspora chapter of the group said he has travelled to virtually al parts of the world and discovered they all preserved their traditions, “hence the need to ensure that ours is preserved. Because that is our identity”.

Ivory Coast based patron of the group, High Chief Simon Umeh, Ichie Ezeude from Umuoji appealed to all members to work as a team so as to achieve the set target.

Another patron, Eze Ebube Ojoto -Dennis Okafor promised to take the group and her potentials to great heights across geopolitical zones and overseas.

He charged them to look beyond gathering to make merry from time to time, but to adopt activities to lift humanity, Igbo culture, tradition and tourism.