Home » Politics » 2023: Why candidates will sign second peace accord – Abubakar 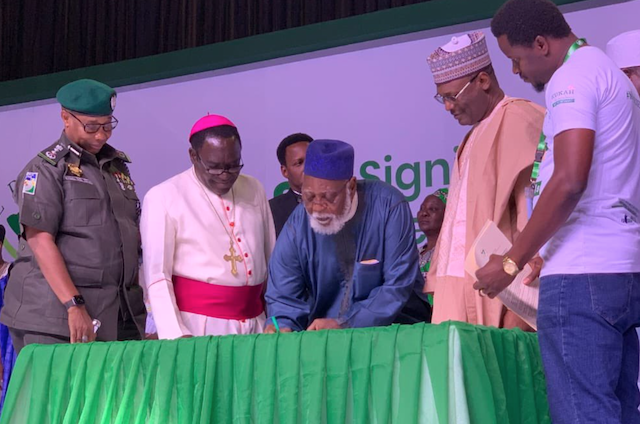 Chairman of the National Peace Accord, Gen. Abdulsalami Abubakar (rtd) has said political parties and their presidential candidates will sign a second peace accord, saying that this was intended to commit the candidates to accept the outcome of the 2023 elections as long as it is adjudged to be free, fair and credible.

TheNewsGuru.com (TNG) reports that the leadership of the 18 registered political parties and their presidential candidates signed the first peace accord on Thursday in Abuja to commit themselves to a peaceful electioneering campaign.

The candidates included Alhaji Atiku Abubakar of the Peoples Democratic Party (PDP) and Asiwaju Bola Tinubu of the All Progressives Congress (APC), represented by his running mate, Alhaji Kashim Shettima.

Others were Mr Peter Obi of the Labour Party (LP) and Sen. Rabiu Musa Kwankwaso of the New Nigeria Peoples Party (NNPP). Some more were Mr Adewale Adebayo of the Social Democratic Party (SDP) and Justice Peter Umeadi, the flag bearer of the All Progressive Grand Alliance (APGA).

In his remarks, Abubakar, a former Nigerian military president said the signing of the peace accord which started in 2015 was still relevant for 2023, noting that the issue of fake news and misinformation posed a singular threat to the 2023 general elections.

Abubakar thanked political parties, party chairmen and candidates, and indeed everyone that turned out for the 2015 and 2019 peace accord. He further noted that NPC’s efforts contributed significantly to mitigating violent conflicts in previous elections in spite of the challenges.

“Now that the 2023 general elections are around the corner, issues of major concern that have the potential to negatively impact on the integrity are better imagined. One of such issues is the spreading of fake news. Fake news and misinformation continue to pose a significant threat to the 2023 general elections. I am told already that fake news has also declared the winner of the 2023 election even before the exercise.

“It has shifted focus away from issue-based campaigns and created the platform for political parties to resort to name calling, personal insults and character assassination. It has taken away our civility and decency in public discourse and conversations and created a toxic atmosphere that has the potential to incite citizens against the state, against other political parties and candidates. It is for this reason that the NPC has organised the signing of two peace accords with the 2023 general elections on the way,’’ he said.

Abubakar explained that Thursday’s peace accord was to commit political parties, presidential candidates and their spokesperson to peaceful political campaigns and rallies, devoid of violence, incitement and personal insults. He said it was also to ensure that the campaigns were defined by issues at the very heart of the national development and progress.

“The second accord, God willing, will come up shortly before the elections, and it is intended to commit the candidates to accepting the outcome of the votes as long it is adjudged to be free, fair and credible. We hope this will take place sometimes in January 2023,” he said.

Abubakar also urged political parties and their candidates to base their campaign on issues affecting the country and not on personal attacks or fake news.

“It is time for us to promote issue-based campaigns. We are calling on politicians to address issues that are fundamental to Nigerian citizens. We also want to promote respect and tolerance of differences in opinions. We want to ensure that there is civility and decency in public discourse.

“I appeal to political parties, party chairmen, candidates and their spokespersons to please campaign on the basis of issues that are of significant concern to Nigerians.

“Avoid the spread of fake news, personal attacks and insults and comply with the spirit and letter of this accord. I appeal to the electorate also to realise that do no good to our electoral process,’’ Gen. Abubakar added.

A 14-year-old student at the event, Miss Naomi Oloyede urged leaders and political actors, especially candidates to put Nigeria first in all their conduct.

Oloyede charged them to avoid violence and promote peace during their campaigns.

“As you start your campaigns, please, in the name of God, have our future in mind and try to leave a safe country for us.

“This is not the time to settle scores. This is the best gift you can give to us and the greatest assurance that you will retire in peace. If you do this, you will be remembered with fondness and not with blame.

“I look forward to growing in a beautiful country where there is peace and the rule of law is respected,” she said.

Sani is also the National Chairman and presidential candidate of the Action Democratic Party (ADP).

He said parties had been praying for peace so that Nigeria would continue to maintain its leadership position in Africa and in the comity of nations.