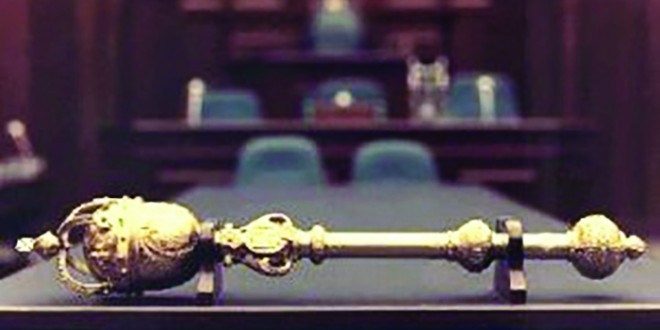 Bayelsa on Monday boiled over the refusal of Speaker Tonye Isenah to resign during resumption of plenary.

Last week, Isenah hinted that he would leave his office for a lawmaker from another local government area following pressure mounted on him by some Peoples Democratic Party (PDP) leaders as part of the ongoing permutations in the party to win the November 16 governorship poll.

But Isenah gave most of the lawmakers a shocker of their lives when instead of relinquishing his position at the end of the sitting, adjourned the House sin die and asked the lawmakers to proceed on recess.

Shortly after the adjournment, there was heavy gun battle and amidst the confusion, the mace, which is the symbol of authority, was said to have been violently removed from the House.

While some sources said the Speaker left with the mace, others said thugs stormed the Hallowed Chambers and took the mace away.

The gun battle, which lasted for 15 minutes, reportedly caused confusion among journalists and workers at the complex as people ran to different directions for safety.

Isenah was said to have left the assembly complex in the company of four APC lawmakers and a PDP lawmaker, Bonny-Ayah, who represents Southern Ijaw Constituency 1.

The remaining members of the House led by the Deputy Speaker, Abraham Ngobere, who represents Brass Constituency 3, reconvened the House and ordered journalists out of the Hallowed Chamber.

It was learnt that another mace was later brought into the House and was used to move for the impeachment of the speaker.

A lawmaker representing Sagbama Constituency 2, Bernard Kenebai moved for the impeachment of Isenah and he was supported by unanimous voice votes from other members.

Another lawmaker, Oboku Oforji, who represents Yenagoa Constituency 1, immediately moved for the nomination of Monday Obolo as Speaker and he was seconded by Naomi Igoli of Ogbia constituency 3.

But Isenah dismissed the activities of the lawmakers describing them as illegal and insisted that he remained the authentic speaker.

Reacting to the development, he said: “I went to the House this morning and presided over plenary session. Since the beginning of the 6th Assembly all other Houses of Assemblies have gone on recess, even the National Assembly has gone on recess and are back but we have not gone.

“We have been working since and we are tired too. So today in plenary, I presided over plenary and commended the lawmakers for their commitment and I have adjourned the House sine die as we have gone on recess.

“That proceedings for the House of Assembly have been adjourned, any member who stayed back to do any illegal thing is on his own. The Sergeant –at-Arms escorted me out of the chambers meaning that House stands adjourned. That means nobody can reconvene the House except me.

“Let them show me any document to that effect where I said I was going to resign. I want Bayelsans to note that the Bayelsa State House of Assembly is an independent arm of government that should be respected”.

But Obolo, who emerged a speaker in controversial circumstances, denied the alleged disappearance of the mace of the House.

He said: “The House of Assembly is a one united family. It is an honor to have been elected to lead the Sixth Assembly. We are meant to debate and 18 members elected me. Bayelsa should expect the dividend of democracy.”

The governor described the new Speaker as a promising, young and vibrant political leader with the capacity to carry out the sensitive responsibility of presiding over the affair of the Legislative arm of government.

He called on the members of the Assembly to give the requisite support to the new speaker to enable him to succeed in his new position as the Head of the Legislature in the state.

Dickson advised the Speaker and the members of the Assembly to ensure that the Assembly legacy of stability was sustained.