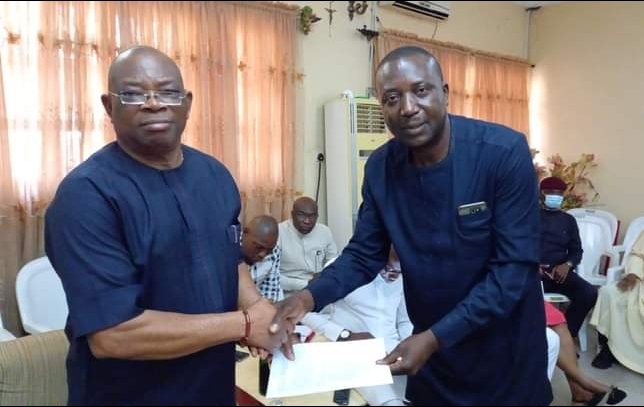 The committee setup by Delta Central 2023 (DC-23) to screen governorship aspirants of the People’s Democratic Party (PDP) from the Senatorial District for the 2023 elections has submitted its reports.

TheNewsGuru.com (TNG) reports the screening committee setup by the lobby group submitted its report with Chief James Augoye, the State immediate past Commissioner for Works, and Rt Hon Sheriff Oborevwori, Speaker of the State House of Assembly making the list.

Other aspirants of the PDP from Delta Central, who made the list are Senator Emmanuel Aguariavwodo, Chief David Edevbie and Chief Kenneth Gbagi.

The committee was given terms of references to identify all aspirants from Delta Central Senatorial District; look at the PDP guideline and the Nigerian Constitution for qualification of the person for the office of the Governor of the state; and interact with such aspirant(s) and carefully examine each of them if he/she has what it takes to be Governor of a state.

Other terms of reference are to draw/set/develop their own strategy/modus operandi in carrying out the committee’s work; take evidence directly or indirectly for the purpose of evaluating their medical fitness, financial capability, suitability, capability, acceptability; make other recommendations based on evidence gathered from all over the state and country and amongst others.

The committee noted that after series of meetings and screening exercise within the given time, they recommended the following persons on alphabetical order of their surnames for the next round of screening; Senator Chief Emmanuel Aguariavwodo, Chief James Augoye, Chief David Edevbie, Chief Kenneth Gbagi and Rt. Hon. Chief Sheriff Oborevwori.

The committee pointed out that they carried out the assignment in the best interest of Delta Central Senatorial District and the State in general.

In his response, National Chairman of DC-23, Chief Senator Ighoyota Amori conmended the committee to have painstakingly carried out the assignment given them.

He urged them to further prune the number to three as encapsulated in the committee terms of reference.

“Therefore, the committee is hereby further directed to reduce the number to three and has up to January ending 2022 to submit its final report.

“The committee having had several meetings, discussions, interactions and evaluated the curriculum vitae, mission statement and profile of the aspirants that appeared before them, can now resort to public perception and rating in their acceptability across the state, accessibility, integrity, capability, credibility and pan Delta disposition.

“I hereby plead with those who didn’t make the list of five and later three to accept the committee’s report and recommendation in good faith, as only one perron can be Governor at a time. The twelve aspirants were all heroes and winners,” Amori added.