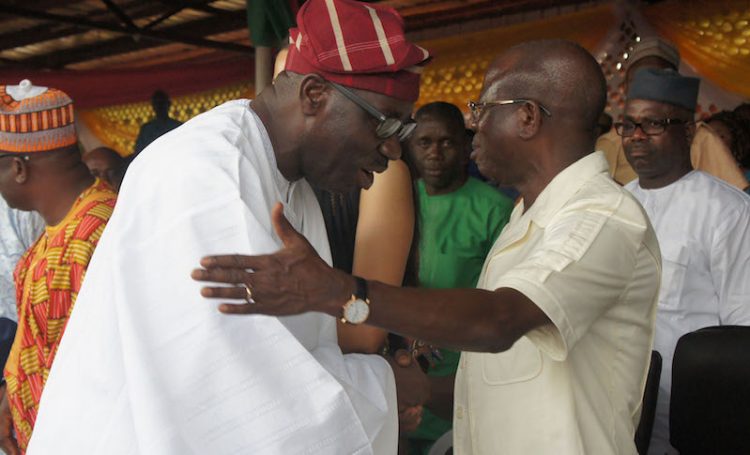 The Edo State Governor, Mr. Godwin Obaseki, has reaffirmed that he has no plans to leave the All Progressives Congress (APC) for another political party.

The governor spoke when he received members of the Godwin Obaseki Support Group (GOSG), during a courtesy visit at Government House in Benin City on Wednesday.

Recall that the national chairman of the APC and Obaseki’s predecessor, Adams Oshiomhole had on Wednesday said the governor was secretly nursing plans to dump the party.

“If a handful of individuals start misbehaving and feel we will leave the party for them; they will be the ones to leave,” he said.

Obaseki described the APC as a party for the youths and the next generation, adding that his administration is focused on infrastructural and institutional reforms that would stand the test of time.

“This is a government of real change, which is concerned about youths and the future. This government has performed beyond people’s expectations and we are proud of the things we have done so far.”

Obaseki commended the GOSG for supporting his administration, urging members of the group to intensify their activities in the state and collaborate with other groups with the same ideology.

The governor urged the group to collaborate with the state government in the campaign to kick out thuggery in the state.

Earlier, the Director-General of the group, Mr Henry Idogun, said the group was formed during the 2016 governorship election to bridge the information gap, which existed on the governor’s profile.

He said: “The group was happy with the developmental strides of the Obaseki led-administration which include massive and sustained infrastructural development and deep-rooted institutional reforms, noting that the award presented to the governor by the Nigeria Union of Teachers (NUT) was well-deserved as the governor has made Edo State a reference point in transforming education in the country.”

Idogun said GOSG exists to add value to governance and leverages the party machinery and other relevant stakeholders in the areas of voters’ education and mobilisation, creation of more polling units and election monitoring.

He added that members of the group, numbering over 18,000, are in support of the second term bid of the governor.