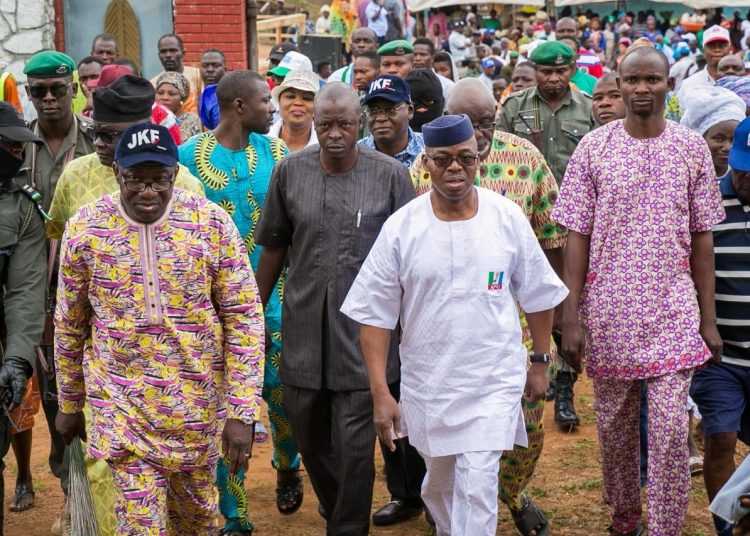 The Elders’ Forum of the All Progressives Congress (APC) in Ekiti State has called on former Governor Segun Oni to withdraw the suit challenging the eligibility of the governor-elect, Dr. Kayode Fayemi, to stand as a candidate in the last governorship election.

The body made the appeal at a meeting held on Wednesday in Igbara Odo, Ekiti Southwest Local Government Area, presided over by its Chairman, Chief George Akosile.

The issue formed the major topic of discussion at the APC Elders’ Forum meeting with members resolving that withdrawal of the case by Oni would be in interest of the party and Ekiti State.

According to a communiqué issued at the end of the meeting a copy of which was made available to reporters in Ado-Ekiti on Friday, the APC elders said the withdrawal of the case by Oni and his group will facilitate an out-of-court settlement.

In the communiqué signed by Akosile and the Forum’s Secretary, Chief Abiodun Ajayi, the group resolved to send a five-man delegation to Oni with a letter appealing for the withdrawal of the case.

The Ekiti APC Elders’ Forum also resolved to send a memo to Fayemi to reconcile the aggrieved (Oni) group with a view to withdrawing the case from court and their inclusion in the forthcoming administration.

The communiqué reads: “The Ekiti State APC Elders’ Forum at its meeting held on Wednesday, 29th August, 2018 under its Chairman, Asiwaju George Akosile at Igbara Odo Ekiti, having reviewed the various steps taken by the Forum on the above subject matter including the following:

*Invitation and meeting with the representatives of Asiwaju Segun Oni at Igbara Odo, Ekiti

*Sending a memo to the Governor-elect as to reconcile the aggrieved group with a view to withdrawing the case from Court and their inclusion in the scheme of things in the forthcoming administration in Ekiti State, from our findings, the Elders’ Forum is aware that the case is still pending in the Federal High Court, Abuja.

“We hereby wish to appeal to Asiwaju Segun Oni and his group to withdraw the case from the Federal High Court, Abuja as to facilitate an out-of-court settlement in the interest of the APC Family in Ekiti State, in particular and Nigeria in general.”

The former governor is urging the court to nullify Fayemi’s candidacy on grounds that he (Fayemi) did not resign from his position as Minister of Mines and Steel Development 30 days before the APC primary.

Fayemi won the APC governorship primary held on May 12 in Ado-Ekiti, the state capital, by polling a total of 941 votes beating Oni, who scored 481 votes to the second place and 31 other aspirants

Oni also dragged Fayemi to court on grounds that he was indicted by Ekiti State Judicial Commission of Inquiry set up by Governor Ayo Fayose and handed a 10-year ban from holding public office.

Oni, as the Claimant/Applicant filed a suit before a Federal High Court, Abuja presided over by Justice Nnamdi Dimgba. The suit is marked FHC/ABJ/CS/663/18.

Joined as Defendants/Respondents in the case are Dr. Fayemi, APC and Independent National Electoral Commission (INEC).

The court on 20th August issued an ex parte order for substituted service on the defendants.

Justice Dimgba ordered: “Upon the Motion Ex Parte dated and filed on the 9th day of August, 2018 praying for the following reliefs:

*An order of substituted service of the Originating Summons and other processes in this suit on the 1st Defendant by substituted means, to wit; by delivering the processes to the Chairman, All Progressives Congress (APC), Ekiti State, the 2nd Defendant, at the party’s secretariat, No 156, Ajilosun Street, Ado-Ekiti, Ekiti State, or alternatively

Oni’s supporters said the court case was triggered by alleged non-inclusiveness, ostracisation, marginalization and demonstration of open hatred for them by Fayemi’s supporters.

They said the legal action would defend their rights, privileges and interests within the party alleging that they are suffering so much unwarranted abuse and humiliation in the party.