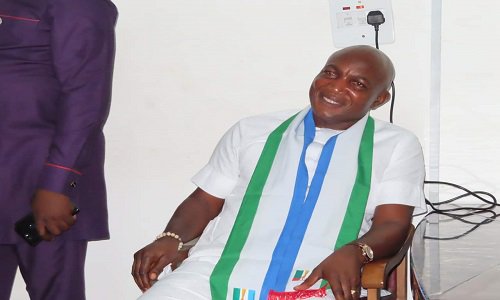 The Supreme Court on Thursday voided the election of Bayelsa State Governor-elect, David Lyon, on the grounds that his running mate, Biobarakuma Degi-Eremienyo, presented false personal information to contest the  November 16, 2019  governorship election in the state.

A five-man panel of the court led by Justice Mary Peter-Odili, held in a judgment that Degi-Ermienyo,  was not qualified to have contested the election with Lyon.

The apex court set aside the judgment of the Court of Appeal on the case, which had reversed the decision of the FHC.

Ekwo added that  in view of the discrepancies in the names on  the certificates submitted by Degi-Eremienyo to INEC, he was not qualified for the election.

The judge noted that it was established from the documents submitted   that the deputy governor-elect forged the certificates and fraudulently used different names when it suited  him.

He also noted that the deputy governor-elect and  the  APC  did not dispute the affidavit deposed to by the appellant that the multiple names were clearly and fraudulently used in the form CF001 submitted to INEC.

The judge held that an affidavit of regularisation of names purportedly tendered by Degi-Eremienyo and published in the Chronicle   (which he tendered at the trial court) was a futile attempt to justify the multiplicity of names submitted to INEC and contained on his certificates.

He  held that the primary school certificate obtained in 1976, GCE obtained in 1984, first degree obtained in 1990 and others were a  product of forgery and that Degi-Eremienyo violated Section 182 of the   Constitution.

Some of the certificates and names are: First School Leaving Certificate in 1976 with the name: Degi Biobaragha; West African Examinations Council General Certificate of Education (GCE) in 1984 in the name of Adegi Biobakumo, and First degree certificate of the Rivers State University of Science and Technology in the mane of Degi Biobarakuma.

Justice Ekwo faulted Degi-Eremienyo’s claim that he regularised the discrepancies in his name by deposing to an affidavit and publishing it in a newspaper and held that he did not comply with the right procedure.

He then voided the joint ticket of Lyon and Degi-Eremienyo and set aside their participation in the   governorship election on the grounds that the deputygovernor-elect’s    disqualification had affected the joint ticket with which they contested  the poll.

He then ordered INEC to withdraw the Certificate of Return issued   to the APC candidates as the winners of the  election  .

The apex court also ordered INEC to issue fresh certificates to the candidates of the party with the next highest votes and with the required constitutional spread of votes in the results of the election, which are the Peoples Democratic Party candidates.

The judge said: “It is nothing new to say that affidavit of change, correction and confirmation of name has to be by Deed Poll and not mere deposition.

“It must be stated that such correction or change will necessarily affect National Record and Archives of the country.

“Therefore, the deponent, after executing a Deed Poll, has to approach the Nigeria Civil Registry to have the change published in a gazette. None of these was done in this case.”

In faulting Degi-Eremienyo’s claim that his  academic credentials were issued to him with errors in the names, the judge said: “I need to say one more thing on this.

“There is no evidence before me that the 3rd defendant ever made any representation to the respective authorities that issued the certificates for correction. He would have done this if he was the rightful owner.

“It is only the right owner of a certificate that can approach the institutions that issued him such certificate to complain about any error therein and have same corrected.

“Any person who brandishes a certificate that does not have his name on it but claims that the name thereon is his but there error on the name yet he has made no attempt to have the institution that issued the certificate to correct the said error is not the owner of the certificate. This is a matter that leaves no room for presumption. “