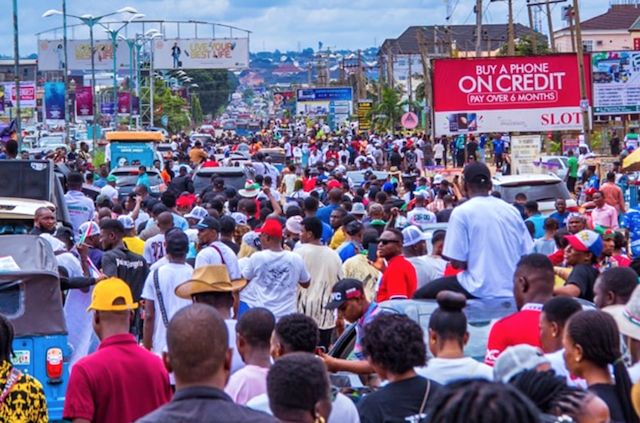 Thousands of Labour Party (LP) supporters known as “Obidients” on Saturday shut down Asaba, the Delta State capital during a rally to drum support for its 2023 presidential candidate, Mr Peter Obi.

The rally, tagged, “One million-man march for Peter Obi,” took Asaba by storm as the supporters marched down major roads, as the residents celebrated the nation’s 62nd independence anniversary.

All major roads in Asaba witnessed gridlocks while motorists and other road users groaned over the traffic jam.

The crowd of supporters marched along the popular Nnebisi road in the heart of the town down to the Inter-bua roundabout, chatting solidarity songs in support of Obi.

The Labour party supporters mainly youths were drawn from across the 25 LGAs of the state.

A supporter, Mr. Festus Edomoro, told NAN that he came all the way from the riverine community of Patani to participate in the rally meant to draw support for Obi’s 2023 presidential bid.

“We are here today to draw support for our candidate, Mr. Peter Obi. He is the new hope for a better Nigeria.

“I came all the way from Patani to be part of this mega rally, and I am happy to be here. I desire a new Nigeria, and Obi is the face of a new Nigeria,” Edomoro said.

A commercial motorist, Mr Chiedu Okoh who took part in the rally, told NAN that he was confident of the victory of Mr. Peter Obi at the poll.

“I abandoned my daily ‘hustling’ today to be part of this rally. As you can see, everyone is yearning for Obi, so I can’t be different.

“As a nation, Nigeria has come a long way and this is the time for us to make a choice. Obi is our choice out of those jostling to be president.

“You can see for yourself that Nigerians are tired of the old politicians. This is the time for a change and Obi represents the change,” Okoh said.

Why we organized Obidatti rally in London - Peter Obi's supporters