Founder and President of the Omega Power Ministries (OPM), Apostle Chibuzor Chinyere, has donated a fully equipped restaurant to the family of late Deborah Samuel, who was killed for alleged blasphemy in Sokoto.

TheNewsGuru.com (TNG) recalls that when the family lost their daughter, who was a student at Shehu Shagari College of Education, to the mob attack, the General Overseer of Omega Power Ministry promised to help transform their lives. 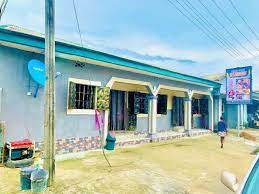 In fulfillment of his promise, Apostle Chibuzor earlier helped the family move from Kaduna to Port Harcourt, where he gifted them a mini estate and a car. He also placed the siblings of the late Deborah on scholarships.

One of the men of God in Nigeria who has blessed thousands of lives (Apostle Chibuzor) did not stop there, either, as he just donated a fully equipped restaurant to the parents of late Deborah Samuel. 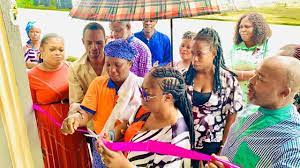 Sharing photos of the newly commissioned restaurant on Twitter on Monday, June 20, he wrote,

“I donated a fully equipped restaurant to the family of late Deborah Samuel today June 20, 2022. All these are sponsored through the tithes and offerings in OPM church”. 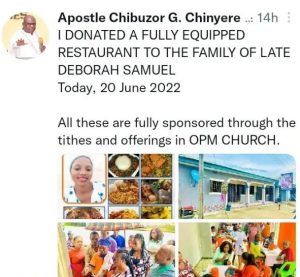 It would be recalled that the Muslim Rights Concern (MURIC) condemned the killing of Deborah over the allegation of insulting prophet Muhammed.

Director of MURIC, Professor Ishaq Akintola, in a statement, described the killing as outrageous, illegal and unlawful.

He said those aggrieved by the student’s post should have reported her to the security agencies.

Akintola said mob killing is archaic, bohemian, belongs to the Stone Age and that nobody has the right to take the law into his hands.

“In like manner, Prophet Muhammad himself condemned all acts of violence and advocated peaceful conduct at all times,” he said.

However, the group stressed the killing shouldn’t be condemned in Isolation

MURIC stated that a recent trend whereby Nigerians now freely shed their brothers’ blood should be condemned by all patriots.

“We frown at the recent burning last week of a truck fully loaded with cows in the South East as well as the killing of many Muslims of South East origin by their Igbo brothers in the same South East.”

The organization appeal to Nigerians to desist from insulting, deriding or abusing the prophets of other religions.

“Muslims should continue to respect Jesus (peace be upon him) whom the Christians hold very dear. Christians should avoid casting aspersion on the person of Prophet Muhammad”, Akintola added.