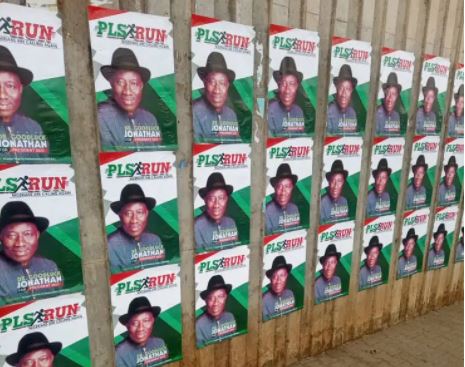 Posters of former President Goodluck Jonathan are scattered in different locations and Abuja beckoning on him to contest the 2023 presidential election.

The graffiti on the posters, which have the inscription, “Please Run, Nigerians Are Calling Again”, a group known as Greater Nigeria Ambassadors (GRENA), are behind them.

Although Jonathan is yet to throw his hat into the ring, there are signals that he is interested in the race.

There are reports that Jonathan is being considered by a section of the presidency and some governors of the All Progressives Congress (APC) for the presidential ticket of the party come 2023.

The former president has been very frequent at the seat of power, hobnobbing with his successor.

This has created anxiety in the ruling party, which has other presidential aspirants from the South, should APC decide to zone its presidential ticket to the region.

Last year, the Peoples Democratic Party (PDP) had alleged that the APC was wooing Jonathan but the APC responded saying he was free to contest on its platform.

Jonathan has been absent from key PDP functions of late. He did not attend the party’s convention, which held late last year.

In Lagos, the posters are on the ever busy Ijaiye road, Ogba, Oba Akran Avenue, Ikeja under bridge and both sides of the road leading to the Murtala Muhammed airport road in Ikeja.

In Abuja, the posters are in AYA , Asokoro and Finance bridge, around Federal Secretariat.

Reactions pour in as Super Eagles crash out of 2021 AFCON