by Abimbola Fabunmi
in Football, Sports
Reading Time: 2 mins read
A A
0 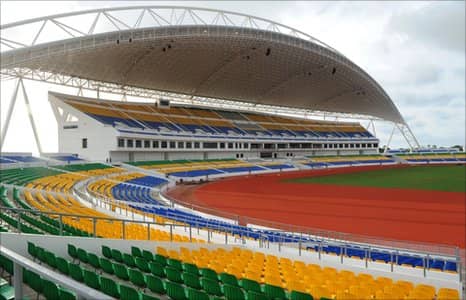 Officials of Confederation of African Football (CAF) have hinted that the Cape Coast stadium Ghana could be approved for the Worldcup qualifying play-off between the Black Stars of Ghana and the Super Eagles of Nigeria.

On Tuesday, CAF took a final look at the state of Cape Coast Stadium to ascertain if it would be suitable to host the Qatar 2022 World Cup qualifier between the Black Stars and Super Eagles.

The CAF officials had visited the Baba Yara Stadium, Kumasi, for a similar inspection following viral reports that the Cape Coast Stadium was in bad shape.

Cape Coast Stadium hosted all of Ghana’s Cameroun 2022 Africa Cup of Nations qualifiers and their previous World Cup elimination matches. But the stadium, which was rated as Ghana’s current best venue by CAF, suffered a huge blow when the government hosted its March 6 Independence parade there, with students, workers and security horses trampling on the pitch.

The Ghana Football Association (GFA) and National Sports Authority in the country are racing against time to ensure that CAF doesn’t move the game outside Ghana as stadia in Benin Republic, Morocco are being considered as options should the cape coast stadium not fully ready for the match.

However, CAF officials who visited the stadium in Cape coast on Tuesday felt satisfied with the level and speed of preparations and assured that if it continues with the speed Ghana may play the match against Super Eagles at the venue.

The Ghana versus Nigeria match is the final Worldcup qualifying play-off that will ensure that the winner gets the ticket to the mundial .

Five countries will represent Africa at the worldcup in to be hosted by Qatar in the summer of 2022.