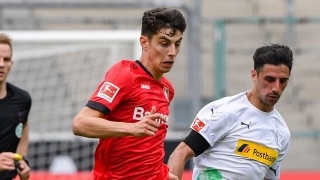 The battle to sign Havertz has intensified since reports emerged that Chelsea were preparing a £75million bid for the Bayer Leverkusen star.

United are reportedly considering Havertz as an alternative to Borussia Dortmund winger Jadon Sancho, whose price tag will be at least £80m and could rise to more than £100m.

And now it has emerged that Havertz is interested in hearing what United have to offer – even though Chelsea are further advanced in their talks than their Premier League rivals.

Chelsea potentially have the advantage of being able to reunite Havertz with his Germany teammate Timo Werner, who is expected to join the Stamford Bridge side in a £52m deal.

However, Havertz’s representatives have been informed of Ole Gunnar Solskjaer’s big plans for United, with the Red Devils boss aiming to forge a new era at the club, reports the Mirror.

‘END OF ROAD IN APC…’: Obaseki speaks on his next line of action says disqualification unjust