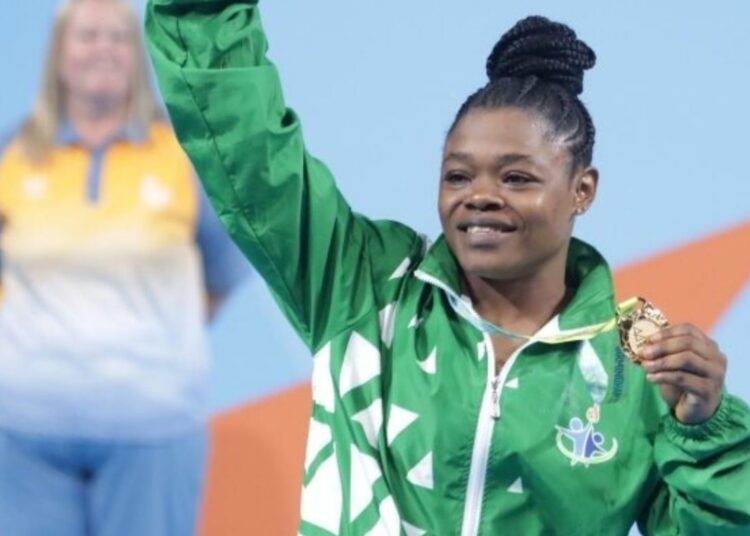 Lawal beat her rivals in the women’s weightlifting 59kg event, setting a Commonwealth Games record in the process.

She is the second Nigerian female lifter to smash the Games’ record after Adijat Olarinoye produced a stunning lift in the women’s 55kg on Saturday.

The 26 -year- old followed the footprint of her compatriot, Olarinoye Adenike Adijat who had on Saturday night won Nigeria’s first gold medal in weightlifting event.
Earlier on Sunday morning, Edidiong Joseph Umoafia narrowly lost the gold medal but settled for bronze. He lifted a total of 290kg in the 67kg men’s category comprising 130kg snatch and 160kg clean and jerk to be placed 3rd.
Reacting to the medals haul so far, Nigeria Weightlifting Federation, NWF President, Dr Ibrahim Abdul attributed the success story so far to God’s blessings as well as early preparations.
“First of all, I cannot control my joy at this point. Yesterday I said that Nigerians should expect more medals from weightlifting. I said that because I know the quality of lifters we brought to Birmingham. Committed, hard working children who are ready to continue to do the country proud.
“Our success stories so far are evidences of Gods blessings upon us and good preparations. We camped these athletes in Lokoja for complete three months ahead of the Games and today, God is rewarding our efforts with medals.
“We have 9 athletes in weightlifting, five have competed and we have three medals – two gold (with new Commonwealth Games records set) and a bronze medals. The other four athletes who will be in action tomorrow and next are in high spirit. They have been motivated by the heroics of their mates and I assure Nigerians that more medals are coming,” he told Nigeria Weightlifting Federation Media in Birmingham.
Nigeria’s hunt for more medals will continue on Monday, August 1 as two lifters will be in action Islamiat Yusuf who won gold in Mauritius in Africa Championship will set Nigeria’s drive in 64kg women’s category by 2:00pm before her compatriot Joy Eze will be competing in the 71kg women category by 6:30pm.
Liadi Taiwo will be in action on Tuesday in 76kg women category by 9-30am while Osijo Mary Taiwo will test action on Wednesday when she will feature in the 87kg women category by 4pm.
Tags: Commonwealth games 2022Folashade LawalGold MedalWeightlifting
SendShare124Tweet78