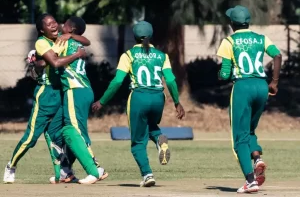 Nigeria defeated her West African rivals by five wickets in the game played on Thursday at the Botswana Cricket Oval.

Sierra Leone won the toss and elected to bat first.

The team’s best performer in Aminata Kamara with 28 runs in 36 balls was not enough for the side as they settled for 102 runs in 20 overs for the loss of nine wickets.

Nigeria came on to chase their opponents in the second innings, scoring 103 runs in 16 overs for the loss of five wickets.

Nigeria’s captain Blessing Etim, declared as the `Man of the Match’ with her 27 runs in 31 balls, including two boundary hits, underlined the team’s performance.

“I am happy with the victory; we are all happy about it. It is part of our plan to win our first game.

“Against Namibia tomorrow, I am expecting us to be better especially, in bowling. and bring our A game. Our mental state is was very high, thanks to our coaches. We hope to be better tomorrow,’’ Etim added.

On his part, the Coach of the team, Onome Oghenekevwe, said the team’s trainings had proved productive.

“Our training has proven very productive and we are happy. We hope that the players will be able to bring that same style or improve better on what they did today, when we face Namibia.

“They girls are usually concerned about what other people will say about them or think of their style of play. So, I just tell them to turn deaf ears and develop thick skin, express yourselves and enjoy the game,’’ he added.

Nigeria will battle Namibia on Friday, in her second game, before facing Uganda on Saturday and Cameroon on Sept. 13, all in group B.

Only one team is expected to qualify from the 11-nation tournament beginning Thursday.