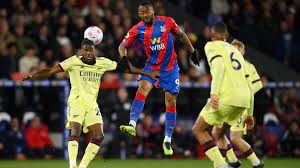 The Gunners avoided a repeat of their 2-0 defeat at Brentford on the opening night of last year’s season for a perfect start as they aim to reach the Champions League for the first time in seven years.

The Gunners were beaten 2-0 at Brentford on the opening night of last year’s season, which triggered their worst start to a league campaign for 67 years.

But they backed up their blistering pre-season form as Gabriel Martinelli’s first-half header and a late Marc Guehi own goal made amends for a 3-0 defeat at Selhurst Park in April.

That defeat sparked a run of five defeats in the final 10 games of the season to cost Arsenal a place in the Premier League top four for a sixth straight year.

But the board has kept faith with Arteta and backed the Spaniard with over £100 million to spend in the transfer market.

Arsenal presently climbed to the summit of the EPL table and the players will hope to consolidate on this achievement.

ASUU: Hope of students going back to sch dashed as FG insists N1.1trn can't be borrowed to end strike