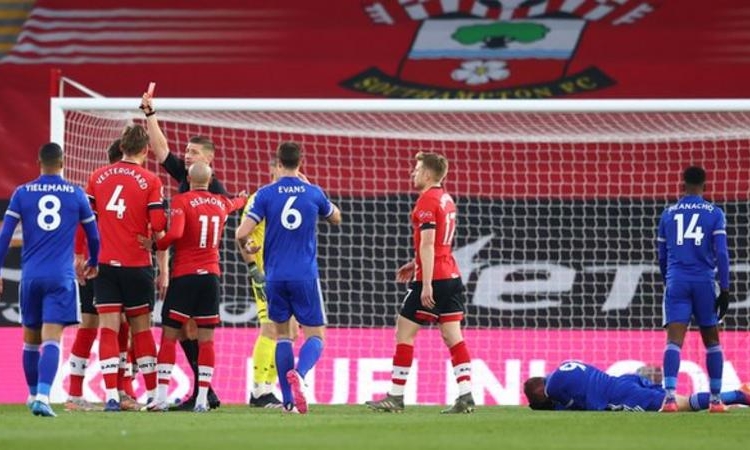 Southampton held Leicester to a draw despite playing more than 80 minutes with 10 men to frustrate the Foxes in their push to clinch a top-four finish.

Jannick Vestergaard was controversially sent off after just 10 minutes when his tackle on Jamie Vardy was deemed to have denied the Leicester striker a goal-scoring opportunity.

Vestergaard, on the edge of his box and the last defender, got the ball with a lunging tackle but referee Robert Jones deemed his follow-through on to Vardy’s ankle had prevented the striker running in on goal.

That decision set the game’s pattern, Leicester probing while Southampton defended deep, but it was the Saints who took the lead in the 61st minute.

James Ward-Prowse scored from the penalty spot after Kelechi Iheanacho had blocked Stuart Armstrong’s effort with his arm raised up by his head.

The point takes Leicester eight points clear of fifth-placed West Ham having played a game more but they have a difficult end of the season to come.

Southampton edge 10 points clear of the relegation zone as they close in on guaranteeing their safety.