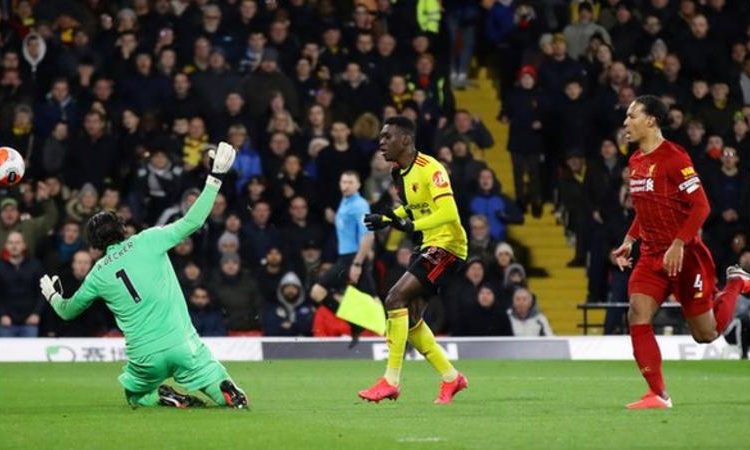 Liverpool’s hopes of remaining unbeaten for an entire Premier League season were ended in sensational style by a rampant Watford at Vicarage Road.

Jurgen Klopp’s side were chasing a record-breaking 19th straight league win but were well below par and only registered one shot on target.

Watford, who started the game with only Norwich below them in the table, created the better chances and finally took the lead their play deserved nine minutes into the second half when Ismaila Sarr poked home Abdoulaye Doucoure’s cross from the left.

On the hour mark, Watford’s record-signing made it two when he raced clear and superbly dinked the ball over Alisson.

The Senegal international then turned provider when he intercepted Trent Alexander-Arnold’s back pass and laid back for Troy Deeney to guide the ball into the net.

It was the second time in a week that Liverpool have gone behind and had their invincible league season put under threat, but unlike against West Ham on Monday they could not turn it around.

Victory for Watford sees them climb out of the bottom three on goal difference, going above Bournemouth, who had earlier drawn 2-2 with Chelsea.