by Bartholomew Madukwe
in Sports, Top Story
Reading Time: 4 mins read
A A
0 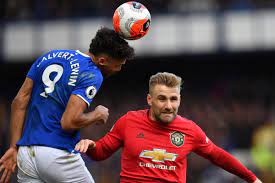 Gordon’s shot deflected off Harry Maguire’s back (27) beyond David de Gea to provide the hosts with the slice of good fortune that has deserted them so often in this torrid campaign.

United, who are close to appointing Erik ten Hag as their new manager, struggled to find their rhythm thereafter as the returning Cristiano Ronaldo’s late booking for petulance typified another disjointed, lethargic display under interim boss Ralf Rangnick.

He may have had the final say when he collected Maguire’s header across goal in stoppage time but his instinctive shot was kept out by the excellent Jordan Pickford.

Everton boss, Frank Lampard said: “I’m very proud. Pressure times. The reality of the situation. At Goodison we have been good. We are getting clean sheets at home. When we come together with fans and players we are hard to beat here.

“It starts with us. The crowd were great but they could switch off if they see people not working. When you are not at your best you have to fight through it. You might give a ball away but the only way to get that back is to fly in and make a tackle.

“Beautiful football can come later on. I have ambitions for this club to stay up, play well, but in the position we are in, fighting comes first and foremost.

“We have missed Delph. It goes unnoticed. If we have one or two defensive midfielders out it’s tough for us as we don’t have that there. He gave us a sense of calm. He was great today.

“It’s one win. We should have got a result in the week but didn’t. You have to keep going. It’s not easy when you wake up the next morning after Burnley. My job first and foremost is to lift everyone. They are a good bunch these players.”

Manchester United boss, Ralf Rangnick, on his part, pointed out that if you do not score a single goal in 95 minutes, the team members have to be disappointed.

He said: We had a good start and should have created more chances out of that domination. Then we concede a deflected shot and lost a bit of our composure.

“The second half we were trying to add creativity with substitutions but we didn’t always take the right decision.

“We had to do something. We needed a goal and we decided to bring Mata and more verticality with Elanga. They were defending with their players in the last 35 minutes. We didn’t find the right player at the right moment. We didn’t have enough players in the box when we played crosses.”

“It’s not only creativity. I think we had enough creative players on the pitch. It’s also about being physical enough in the final third, being physical and trying to score a goal. We didn’t have enough players in the box.”

On United’s top-four hopes, he added: “It’s difficult. As long as we don’t win our own games it doesn’t make sense to hope for good results from the other teams.

“Fred had some muscular problems on his hip flexor. We already are without McTominay. Without both defensive midfielders it isn’t good for us.”

The imminent announcement of Ten Hag could well be viewed as an unwanted distraction for Rangnick, but he said: “I don’t think this should be an excuse. We are Manchester United. We have lots of international players. There shouldn’t be an alibi. There will be a new manager next season. If this is announced now or in 10 days it shouldn’t have an impact.”

After self-imploding at Burnley in midweek, Frank Lampard’s side re-established a four-point gap on Burnley in the final relegation position ahead of the weekend’s remaining games as United suffered another blow to their flickering hopes of a top-four finish.

All five of Lampard’s victories have come on home soil, and it is here at his famous old ground – at its most visceral, obstructive and unwelcoming on Saturday – where Everton’s best hope of staving off a first relegation in 71 years reside.

Lampard’s future had been brought into question following Wednesday’s 3-2 defeat at Burnley having lost eight of his opening 12 games in all competitions since he replaced Rafael Benitez at the end of January, when the club were 16th and four points above the relegation zone.

The former Chelsea midfielder said he “knows the rules” regarding the short shelf life of a manager not picking up results and he was indebted to Pickford in the opening 12 minutes as Marcus Rashford twice forced the England goalkeeper into fine saves to his left.

But for all of United’s early pressure, it was the hosts who took the lead in the 27th minute with their first real sight at goal.

A move down the left started by Allan and involving Richarlison was followed by the ball being cut back to the edge of the area by Alex Iwobi and Gordon’s sidefoot effort took a deflection off Harry Maguire, wrongfooting David de Gea before rolling into the net.

The goal roused the Everton players, as well as the crowd, as the momentum swung dramaticall.

Fred looked to be struggling and was withdrawn in the 37th minute as Paul Pogba was introduced. Everton would see out the half, and Pogba’s first contribution was to hack at Everton’s goalscorer Gordon right in front of referee Jon Moss to be cautioned.

Everton had barely led at home for a sustained period of time since beating Leeds 3-0 on February 12 given Iwobi’s winner against Newcastle came in the 97th minute – but here they were disciplined and picking their moments to sense a second with Gordon snapping into a challenge on Alex Telles but unable to pick out Richarlison with his low cross.

Only once, right at the end did time stand still as Ronaldo collected Maguire’s header back across goal for one last show of defiance from Pickford as he saved ice hockey-style, lifting up a big right glove.

Goodison poured with emotion at the sound of the final whistle. Never has the Spirit of the Blues been sung from all corners with such gusto.