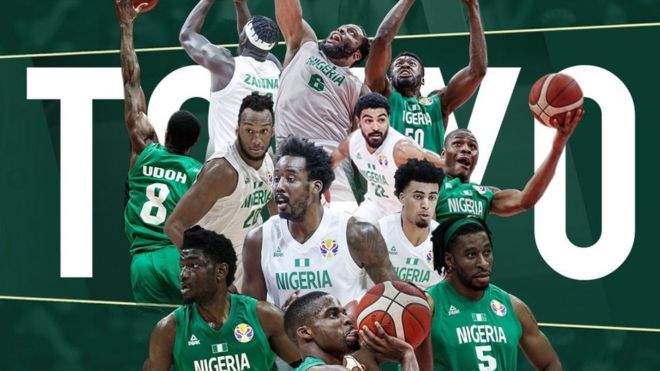 485
The Federal Government has reiterated it’s  assurance of support to our Male Basketball Team, D’ Tigers for their recent superlative performances at the recently concluded FIBA World Championships in China which earned them 23rd position in latest FIBA ranking.
Riding on the crest of this movement from 33rd to 23rd  on FIBA ranking of best teams in the world,  Mr Sunday Dare commended the African Champions and Olympic Qualifiers to Tokyo 2020 for this feat, assuring them of Government support all the way in thier subsequent international competitions.
Similarly, the  Minister  recalled the stellar performancces and skilful display of our Amazon  female basketball team, D’ Tigress, who with the resilient spirit and character of Tiger on the  basketball court, became African Champions at the last AFRO-BASKET Championship  in Senegal, Dakar to win their fourth continental title.
In the same way of giving Government support and encouragement to Basketball, the Minister who visited the Dodan Basketball Academy in Ilupeju,  Lagos today for inspection, stated that he was to play with the basketball  team of starlets between the ages of 6-15 years, both male and female but for the rain, he however promised to visit them sometime in the future.
Mr Dare was received at the Academy by the Proprietor and Vice President of Nigeria Basketball Federation, Mr Babs Ogunade.
Tags: D'TigersFGFIBA Ranking

Living together peacefully and unleashing the potentials of Africa, By Ehi Braimah