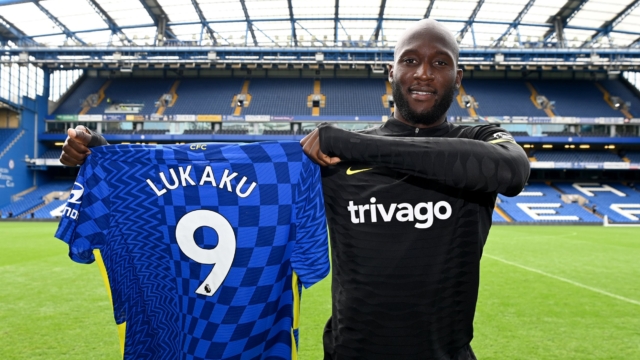 Romelu Lukaku of Chelsea holds his number 9 shirt after a training session at Stamford Bridge on August 18, 2021 in London, England. (Photo by Darren Walsh/Chelsea FC via Getty Images)

Inter Milan Chief Executive Officer, Giuseppe Marotta, has hit out at Chelsea striker, Romelu Lukaku, over his departure from the Serie A champions.

Moratta said that Lukaku left Inter for Chelsea to double his salary.

According to him, there was no difference between Lukaku and Edin Dzeko, whom Inter signed for free to replace the Belgium international in the summer transfer window.

Recall that Chelsea re-signed Lukaku from Inter in the summer transfer window for a club-record £97 million.

The 28-year-old scored on his debut for Chelsea against Arsenal and then netted a brace against Aston Villa.

But Lukaku has since failed to find the back of the net in the Premier League.

“Lukaku was sold for €115m and we bought Dzeko for free. On the pitch, there is not much difference.

“Lukaku left to double his salary. In Italy, these figures can’t exist.

“Today, we can’t make important investments, I would not be allowed to sign Lukaku for €75m. We need reduced and specific investments.”

I still don't know who wanted me out at Barca - Suarez