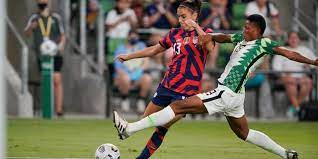 The match which was played in Washington DC saw the Nigerian ladies put up a spirited performance but still fell to the superior firepower of the American ladies.

After containing their hosts in the early part of the game, the Falcons’ defense was eventually breached in 24 minutes as Blessing Demehin put the ball into her own net due to pressure from the attack of the Americans.

Uchenna Kanu equalized for Nigeria in the 50th minute with a fine strike but the American ladies fought back and restored the lead in the 65th minute through Rosemary Lavelle who headed in a cross from  Megan Rapinoe.

It was a much-improved display from the Falcons who were hammered 4-0 by the US in their first meeting on Saturday.

It was the 8th time both teams have met at the senior level and America has come out tops in all of them.

Super Falcons will play another World Cup-bound country Japan in Kobe in October.

The international friendly is expected to put the team in shape ahead of the FIFA senior female world Cup holding in Australia and New Zealand in 2023.

The Falcons will play another friendly this time against former world champions Japan in Kobe on 6th of  October 2022.

U.S. accuses Russia of buying ‘millions of rockets and artillery’ from North Korea for Ukraine invasion

U.S. accuses Russia of buying 'millions of rockets and artillery' from North Korea for Ukraine invasion