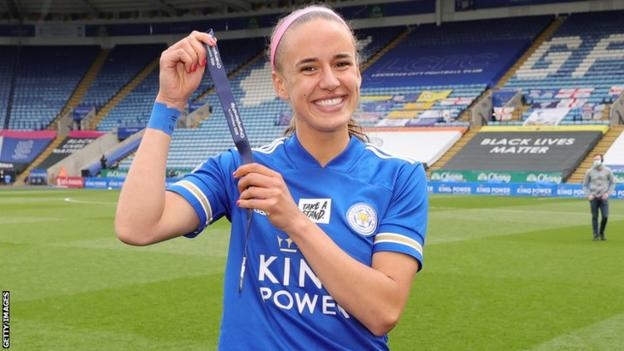 Ashleigh Plumptre, who plays for Leicester City’s women’s team, says she is open to playing for Nigeria despite representing England at youth level.

The 23-year-old is eligible to play for the Super Falcons because of her father’s Nigerian heritage.

“The idea of me being able to play for Nigeria, with that being an option, I would happily grab that with both hands,” Plumptre told BBC Sport Africa.

“What representing something that really means to somebody is very important. Obviously, there’s a lot of things I can openly say that I don’t know about Nigerian culture but I want to learn because I know that it’s in me, and it’s in my sister and in my dad.

“We can only get it from my granddad, he’s the only thing that we know in terms of Nigeria. I’ve obviously visited Nigerian relatives in America and in England.

“Seeing this little journey my sister and I have been on, and the understanding of our family heritage, not just that but watching Nigerian documentaries and learning about the past is incredible.”

After establishing herself at club level, Plumptre who has a British mother, believes a potential international career with Nigeria could pave the way for other biracial footballers to follow.

“What it will mean for me as somebody who is British born but with Nigerian heritage is huge. People look at me and they think I’m tanned and that I’ve been on holiday, they don’t think that I’m Nigerian,” she added.

“I don’t think that should be significant in saying whether somebody is Nigerian or not because it’s in your blood, it’s not about what you look like.

“My sister, she looks African because she has an Afro and her skin tone is darker than mine, with that obviously, she’s had different experiences in school than I have had.
“I think with football being my platform, I am using that as something that’s bigger than me. As much as I can resonate with my Nigerian heritage.

“I feel like I can hopefully inspire someone like my sister or other kids like her maybe in this country or other countries to look at me and be like you know what? It doesn’t matter what your skin tone looks like.

“If you can resonate with your heritage and it means something to you, it means you can represent something bigger than you, then that’s what it comes down to.

“I think people too often look at the surface of this rather than actually try to find out inside what our drives and passions are, and what means a lot to us.”