by Bartholomew Madukwe
in News, Sports
Reading Time: 3 mins read
A A
0 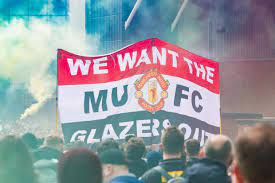 A group of Manchester United fans have staged a peaceful protest against the Glazer family, who own the club, as they unfurled banners against both the club’s ownership and the players.

The protest, which took place at the AON Carrington Training Complex on Friday morning, stopped the team from training until after 2.00pm.

A group of around 30 fans – dressed all in black and with their faces covered – turned up and unfurled banners against both the club’s ownership and the players with messages stating “Not fit to wear the shirt” and “Glazers out”.

The protest was largely peaceful, although fans did express their frustration towards a few of the players as they tried to make their way into the complex, including second choice goalkeeper Dean Henderson.

None of them made into the training ground and they were eventually dispersed by the arrival of the police.

The fans were part of the 1958 Group, who plan to protest at tomorrow’s home game with bottom of the table Norwich City by arriving 17 minutes late to mark the 17 years the club has been under the Glazers’ ownership.

When asked about it in his press conference, interim manager, Ralf Rangnick, had sympathy for how the supporters are feeling, but urged them to get behind the team once they get into the stadium.

“We all know football is a game of passions and emotions,” said the German. “I can understand our supporters are disappointed with our standing in the table and our performance at Everton, at least after we conceded the first goal.

“But I still believe our supporters are the best in England and as long as they do that protest in a peaceful way and support the team in the stadium, they have a right to express their opinion.” 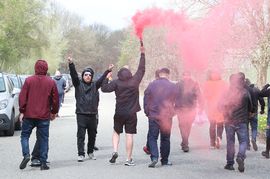 This protest comes almost a year to the day since United fans stormed the training ground in response to the proposed European Super League, when then manager Ole Gunnar Solskjaer came outside to meet them and listen to their frustrations.

But this latest episode is the perfect example of the growing anger and disillusionment at how United are performing on and off the pitch, compared with rivals Liverpool and Manchester City.

“There was a small and peaceful protest outside the Carrington training ground today,” said a United spokesperson. “We respect the opinions of fans and remain committed to strengthening our engagement with them.”

Meanwhile, Nemanja Matic has announced he will leave Manchester United this summer despite having one season left on his contract at Old Trafford.

The Serbia midfielder, 33, informed the club he will not be part of their new era when Erik ten Hag is expected to take charge following Rangnick’s spell as interim manager.

Matic is set to be the first of the departures at United this summer with Paul Pogba, Juan Mata, Jesse Lingard and Edinson Cavani out of contract and leaving unless new deals are brokered.

It will bring an end to five years at United for Matic, where he did not win a trophy but reached the final of the Europa League and FA Cup. He arrived for £40 million in 2017 in the same summer United snatched Romelu Lukaku from under Chelsea’s noses, which played a role in the clubs negotiating a fee.

“After a great deal of thought, I have decided that this season will be my last with Manchester United,” said a statement by Matic. “I have informed the board, the manager and the players of my decision.

“It has been a huge honour and a privilege to play for this great club. A big thank you to the fans for their unwavering support. I will now give everything until the end of the season to help my team-mates finish as strongly as possible.”

Another protest is expected at Old Trafford on Saturday before United’s Premier League match against Norwich.

United have won only three of their past 12 matches in all competitions – losing 1-0 at Everton last Saturday – and are guaranteed to fall short of last season’s final tally of 74 points.