Moses gets ‘cult hero’ tag less than month in Fenerbahce

Chelsea loanee victor Moses has grabbed the cult hero toga among Turkish giants, Fenerbahce FC’s fans, having spent less than one month of the 18 months deal he struck with his new team, a week to the end of the transfer deadline day of January 31.

Moses’ arrival at the Sükrü Saracoglu Stadium has coincided with the club winning back-to-back games to ease their relegation fears and after opening his account for Fener last time out, Moses’ impact has been praised by European football expert Andy Brassell.

“The interesting thing is that he’s become a cult hero straight away because he’s the sort of player that Fenerbahce fans love,” Brassell told the ‘ On the Continent ‘ podcast.

“He dares to do stuff and in a climate that’s been wracked with fear really because the stakes are so high, if you go down it’s an absolute disaster – you can’t really use the word ‘disaster’ in sport – but they would definitely use that there.

2023: Buhari not Nigeria’s Moses neither are you Joshua, Fani-Kayode blasts Tunde Bakare

“He’s someone who comes into that context without being affected by it. He comes on as a sub against Goztepe and wants to try tricks, he wants to dribble around players.

The Nigerian international was actually a regular in the side under Antonio Conte for two full campaigns, but is one to have suffered from a change in head coach and a different formation.

Maurizio Sarri’s to switch from his compatriot’s 3-5-2/3-4-3 system to his preferred 4-3-3 resulted in Moses being frozen out during the first half of the season as he’s not a natural right-back and was well down in the pecking order to start on the flanks.

Meanwhile, Moses replaced Mehmet Ekici in the 46th minutes of the second half in the 1-0 loss to Kayserispor yesterday night. He was shown the yellow card in the 52nd minutes.

2023: Buhari not Nigeria’s Moses neither are you Joshua, Fani-Kayode blasts Tunde Bakare 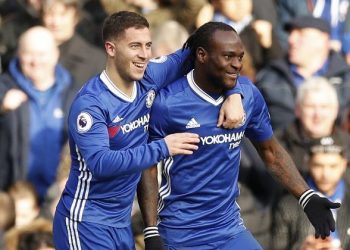