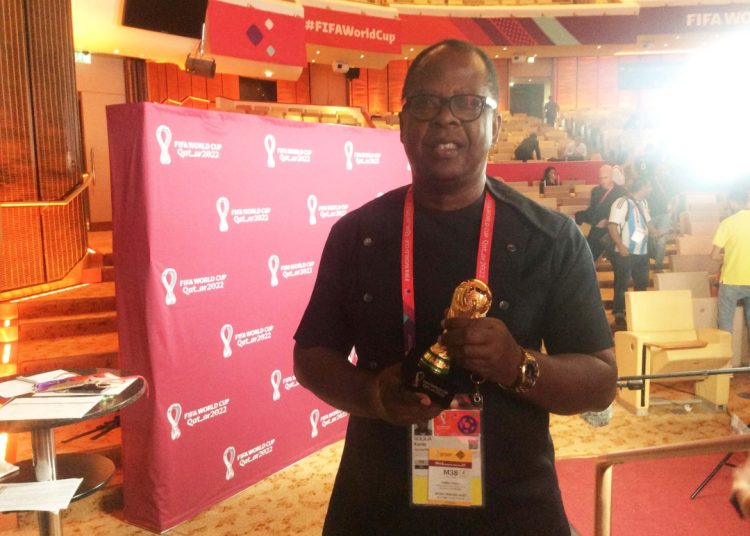 The Nigeria Football Federation has congratulated the foremost journalist, prolific author, and respected diarist, Mr. Kunle Solaja on the occasion of his being honored by the world football -governing body, FIFA in Doha, Qatar on Tuesday.

Alongside 81 other journalists of repute who have attended and reported at nearly a score of the quadrennial global football fiesta and other glamour tournaments, Solaja, a former Sports Editor of Concord Newspapers and the Guardian Newspapers, was awarded a certificate of achievement and a replica of the World Cup trophy, presented by Brazilian legend Ronaldo.

Solaja,  was one of only two Africans on the list, the other being South African Mark Gleeson.

“Today, we are proud to congratulate and celebrate one of our own, Mr. Kunle Solaja, for the honour bestowed on him by FIFA. To attend 10 FIFA World Cup finals is not a joke. Mr. Solaja is a man competent, diligent and passionate about his trade, and we join FIFA to celebrate him as an illustrious servant of the beautiful game,” NFF General Secretary, Dr. Mohammed Sanusi, said in Abuja.

The certificate of achievement was jointly signed by FIFA President Gianni Infantino and President of AIPS (the global umbrella body for sports writers), Gianni Merlo.

Star of the simple but memorable ceremony was 88-year-old Enrique Macaya Márquez, an Argentine freelancer who is covering his 17th FIFA World Cup in Qatar, and whose tally is one more than Uruguayan Diego Lucero, who before his death in 1995, had covered every FIFA World Cup tournament between 1930 and 1994.

Apart from his demanding vocation and commitment to writing history in a hurry, which is the lot of the journalist, Solaja has now written four remarkable books on Nigeria football, namely Super Eagles…Through The Ages, Going For Goals…Unfolding Nigerian Football’s Hidden Stories, Super Eagles @70…Soaring on The Wings and TESILIMI ‘THUNDER’ BALOGUN…The Making Of A Legend.