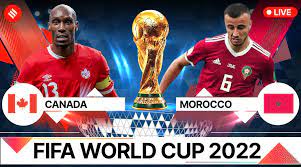 The Atlas Lions of Morocco put up a good showing after defeating Canada by 2-1 in the last group F encounter played  today at the Al Thumama Stadium.

The Moroccans topped a group which included two of the 2018 World Cup semi-finalists to reach the knockout stages for the first time since 1986.

They become the second African country to secure second round passage after the Teranga Lions of Senegal did on Tuesday.

Hakim Ziyech pounced on a loose ball after an howler from the goalie of Canada in the 4th minute of the encounter before Youssef En-Nesyri scored in the 23rd minute to double the North Africans lead.

Meanwhile, Nayef Aguerd scored an own goal to give Canada a goal in the encounter.

Canada bows out of the tournament after failing to record a victory, but will take some lessons away as they begin their long journey back home.

However, two European power horse Belgium and Croatia settled for a 0-0 draw in the other group F encounter.

Belgium needed an outright win to revive hopes of qualification while Croatia needed just a point to make it.

In the end the 0-0 result favoured Croatia as they progress into the second round of the competition.

Morocco and Croatia make it out of the group F.

As for Morocco and Croatia they will now have to wait upon the final results of Group E to see who their opponents will be in the round of 16.